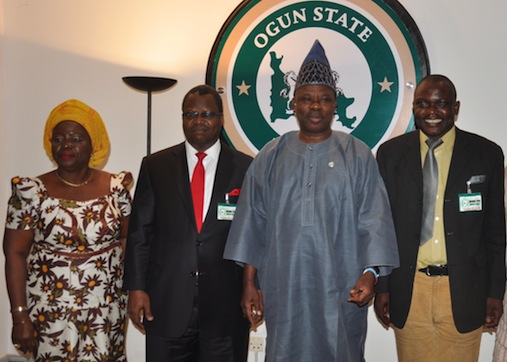 Ogun State Governor, Ibikunle Amosun has charged Nigerian professionals to get involved in partisan politics in order to bring
their expertise and wealth of experience to bear in influencing a positive turn around in the society.

Amosun stated this on Tuesday when he hosted the executive members of the Association of Professional Bodies of Nigeria, led by its National President, Mr. Gabriel Fasooto.

The governor, who commended Nigerians for their expertise in all fields of human endeavours, revealed that he didn’t have any doubt, as to the competence of Nigerian professionals.

“Our administration since we came on board had deliberately employed the services of professionals and we would not relent in this cause,”

The governor, however solicited for the active support and collaboration of professional bodies in achieving the goals of his
administration.

Speaking earlier, the National President of APBN, Mr Gabriel Fasooto appreciated the governor for setting the pace for inclusion of
professionals in government.

He noted that the current administration in Ogun State, through its various developmental strides, has bridged the previously wide gap between the state and the other more developed states in the country.

“Other states have been wondering how Ogun is making progress. The wide gap that existed between Ogun and other developed states has been radically bridged through your developmental strides,” Fasooto added.