Octogenarian, 4 others rescued as 3-storey building collapses in Lagos 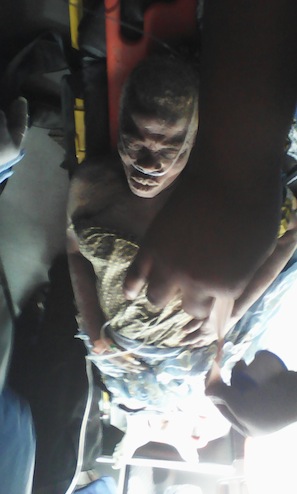 An octogenarian and four others have been rescued after a three-storey building collapsed on Wednesday on Lagos Island, Lagos, Southwest Nigeria.

There are fears that some people are still trapped in the building located at Swamp Street, off Odunfa Street, Lagos Island as rescue officials intensify rescue operation.

PM NEWS gathered that the building caved in around 9:00am on Wednesday with people still inside the residential building said to have been distressed.

A woman in her 80s was brought out of the debris of the building on the second floor around 2:21pm while four others had earlier been rescued.

General Manager, LASEMA, Michael Akindele told PM NEWS that the building caved in around 9:00am and that the agency came to the scene on time for rescue operation and succeeded in rescuing five people.

He said one of them was an octogenarian who was rescued from the second floor of the building with serious injuries, saying that officials of the Lagos State Ambulance Services, LASAMBUS were attending to the woman.

Akindele said the collapsed building was already distressed while people were still living inside the apartment.

As at the time of filing this report around 5.00pm, rescue operation was still on but no death had been recorded so far.

Residents said some people were still trapped in the building, as government officials intensify rescue operation with an excavator.