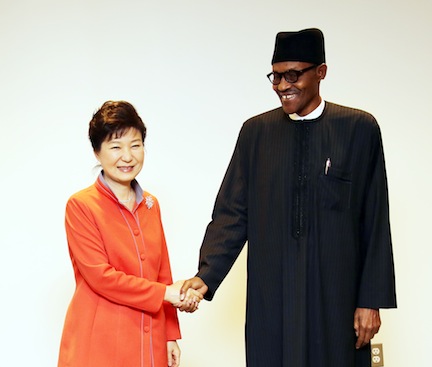 The claim that President Muhammadu Buhari is shy around women, purportedly made by one Gideon Samani yesterday and published by a national newspaper today is totally fallacious.

The subsequent attribution of the supposedly “low number” of female ministerial nominees to President Buhari’s alleged shyness around women is therefore baseless and a figment of the imagination of the said Mr. Samani, who was falsely described as the “Senior Special Assistant (Political Matters) to the President.

The assertion by the alleged Presidential Aide that President Buhari is “very shy dealing with the opposite sex” because “he has been interacting mostly with men,” was received by the President with shock and consternation.

For one thing, there is no Senior Special Assistant, Political Matters, in the office of the President for now and Mr. Samani who was said to have spoken as the Representative of the Secretary to the Government of the Federation at a public function yesterday, is not an aide of the President.

Mr Samani is certainly not an official spokesman of the President. Therefore, he could not have spoken on behalf of President Buhari, who is the President of all Nigerians, men and women alike.

President Buhari has a wife, many daughters and female relatives whom he loves dearly. He also had a mother that he adored. How then could he be shy in the company of women, to the point of allegedly not appointing them into public offices, on account of not being comfortable in their company?

Nigerian women can be assured that the President holds them in the highest esteem and will always give them due consideration in the discharge of his official responsibilities.

The statements attributed to Mr Samani are untrue and unauthorized. They should therefore be disregarded.