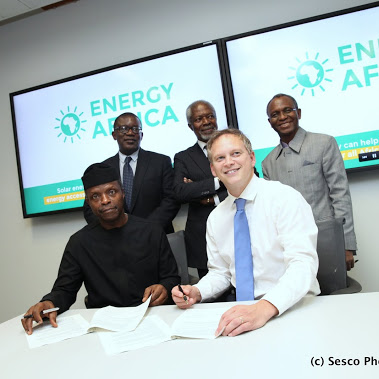 Vice President of Nigeria, Prof Yemi Osinbajo, has stated that solar energy provides an incredible opportunity for Africa to be lit up.

Osinbajo said this when the Federal Government on Thursday boosted its power programme with the signing of an agreement with the United Kingdom on the use of solar energy to provide electricity to rural people in London.

“This is an incredible opportunity in Africa, especially Nigeria with over 96 million people who do not have access to power.”

The event was performed shortly after the launch of the Africa Energy Campaign initiated by the United Kingdom Department for International Development.

Osinbajo said his presence at the launch was to underscore Nigeria’s commitment to the national and regional effort to improve accessibility to power, especially solar power for our peoples.

According to him Nigeria will do its best to ensure that the campaign to boost supply and consumption of solar energy is invigorated and gave an assurance that the Federal Government would work closely with the DFID.

He said that the programme was an opportunity for Africa adding that the advantage of the launch was that the partners could bring universal access to energy.

Osinbajo noted that the use of kerosene had created a lot of safety and environmental issues adding that “a default energy source should be solar and the option was not available for so long, but now it is cheaper, safer, and more environmentally friendly”.

He observed that the campaign was an opportunity for investment which could get a boom such as was experienced in the telecommunications sector in the country.

Osinbajo said that Nigerian market provided the greatest opportunity for the use of small scale solar solutions adding that the country would be the ideal base to push the solar solution in the continent.

“But the challenges are probably as clear as the prospects but thankfully enough they are surmountable.”

The VP urged those who would drive the campaign to also determine the effective cost that would not further impoverish the poor.

He noted that there could not be one particular solution to the need for power adding that the alliance being created by the partners was important.

According to Osinbajo, Nigeria’s partnership with DFID was successful with the application of solar power technology in over 100 schools, hospitals and many primary healthcare centres in Lagos alone.

In his speech Shapps said that the Africa Energy was a campaign to bring justice to more than 600 million people around the continent without access to electricity.

According to him many Africans did not have light in their homes and their children unable to do their homework, while others die of household pollution from use of kerosene and charcoal.

He said the situation was unacceptable and that the campaing needed a group of coalitions and alliances cutting across the business and political boundaries and people with technological capabilities and civil society movements to make it work.

“We have a cause and we have a challenge but it is achievable,” he said.