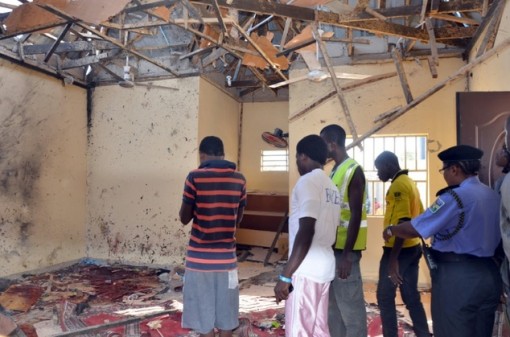 At least 25 students and staff members of Adamawa State Polytechnic, Yola, were affected in the blast at Jambutu Jumaat Mosque on Friday.

The State Commissioner for Higher Education, Alhaji Hamid Rufai, made this known when he spoke with newsmen in Yola on Saturday.

Rufai said four of the 25 students lost their lives while the rest, including two staff members, sustained various degrees of injury.

The News Agency of Nigeria (NAN), reports that the affected mosque belonged to the polytechnic community.

It is located on the Jambutu campus, about five kilometres away from the main campus.

Meanwhile, the casualty figure in the blast has risen to 33 deaths from the initial 27.

The NEMA Coordinator in the state, Mr Saad Bello and his counterpart of Nigerian Red Cross, Malam Aliyu Maikano, confirmed the new figure.

NAN reports that a Federal Government’s delegation led by the Secretary to the Government of the Federation, Dr Lawal Babachir, has visited Yola to commiserate with Government and people of Adamawa.

The team visited Government House, Lamido’s palace as well as the state Special Hospital and Federal Medical Centre to see the patients.