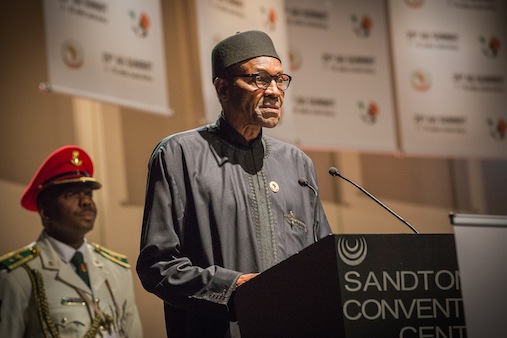 The Coalition Against Corrupt Leaders, CACOL, on Saturday praised President Muhammadu Buhari for resolving to sanitise the Nigerian Army.

CACOL, through its Executive Director, Debo Adeniran, also commended the Nigerian Army for setting up a panel to investigate allegations made against some of its personnel who allegedly colluded with certain politicians to perpetrate rigging in the last gubernatorial elections held in June and October, 2014, in both Ekiti and Osun states respectively.

“To have instituted this panel, the Nigerian Army under the able administration of President Buhari, has demonstrated its determination to restore the virtually battered image of our once globally respected and highly professionalized military.

“It would be recalled that early this year, Nigerians were apparently held spellbound as we listen to a taped conversation in an alleged meeting between some army personnel and some politicians which included Senator Musiliu Obanikoro, Mr. Jelili Adesiyan, the then Minister of State for Defense, the Minister of Police Affairs respectively and the gubernatorial candidate of the PDP in the said election, Ayodele Fayose of the PDP, on the eve of the gubernatorial election, during which rigging plans were being perfected.

“Despite early denials and threat of court action by all the alleged participants in the meeting, none of them could muster the audacity to contest the allegation in court nor could any of them summon the courage to press libel charges against their accusers; a development that clearly underscored their culpability.

Comrade Adeniran said: “under normal circumstances and in a saner and decent society, after the expose with its attendant immeasurable height of embarrassment to our great nation and considering the enormous damage done to the image and profile of our army and the nation in general, one would have expected that a high powered enquiry be set up immediately to probe the source and veracity of the tape and the allegation with a view to bringing the culprits to book in accordance with the provisions of the law.

“But the then government of Dr. Goodluck Jonathan chose to look away and pretend as if nothing had happened.”

“The military institution is so vital to the survival of any nation that, as the watch-men and protectors over its territorial space, we should not, for whatever reasons, toy with its integrity for any political gain for that matter.

“By their orientation and training, soldiers’ constitutional mandate and functions clearly separate them from being involved in any aspect of civil administration, not even for security purpose.

“By their calling and training, the police is constitutionally saddled with the task of providing security within whilst the army takes care of strictly external attack or invasion.

“Therefore, the drafting of soldiers into the affairs of electioneering, is an aberration in any democratic setting and so cannot be excused.

“Even the excuse given by the then government of Dr. Goodluck Jonathan, for involving the army in the said elections, could not hold any water, because our police is adequately trained and equipped to cope with the security demand of the exercise.

“Well, the hidden truth behind such an unpopular decision eventually came to light through the exposition of the controversial tape.

“The Ekiti and Osun states’ experience is a national shame and embarrassment and so should be condemned by any patriotic lover of democracy.”

Adeniran called on every well meaning Nigerian to continue to condemn in absolute terms the shameful, unethical role played by the army personnel and their civilian accomplices indicted in the tape and commend President for bringing the matter up for proper investigation.

“Those found culpable, regardless of their social or political status, should be made to face the full wrath of the law if only to put a final stop to such executive recklessness and to also serve as deterrent to would-be desperate politicians and corrupt members of our disciplined forces.

“Election rigging is a heinous crime against the state; perpetrators should be so punished,” he stressed.