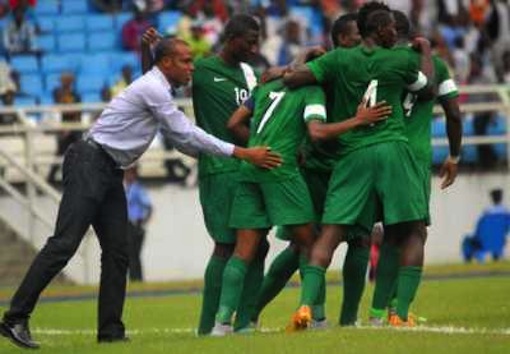 The delegation of Nigeria’s Super Eagles B landed in Ouagadougou, capital of Burkina Faso, on Friday at about 10.10pm Nigerian time (9.10pm Burkina Faso time), ahead of Sunday’s African Nations Championship final qualifying match against the Etalons.

A delegation including 23 players and 13 technical and backroom officials was led by the Nigeria Football Federation, NFF, 2nd Vice President/LMC chairman Shehu Dikko, and travelled aboard a chartered ARIK Air Bombardier aircraft from the Port Harcourt International Airport. The trip was slightly less than two hours.

There were also a couple of stakeholders, some NFF staff, a couple of media representatives and members of the Nigeria Football Supporters Club.

The Eagles’ delegation was received by Mr. Felix Inya, consular at the Embassy of Nigeria in Ouagadougou and Mr. Shehu Ahmed, protocol officer of the embassy, alongside an official from the Federation Burkinabe de Foot-Ball.

The Super Eagles B will have the official training at the August 4 Stadium in Ouagadougou on Saturday evening, with the match to start at 4.00pm (5pm Nigeria time) on Sunday at the same venue.

Following the match coordination meeting at the Splendid Hotel, Ouagadougou on Saturday, all is now set for Sunday’s 2016 African Nations Championship final round, second leg qualifier between Nigeria’s Super Eagles and the Etalons Burkina Faso.

The Eagles take a 2-0 lead into the final leg, with goals from Yaro Bature and Gbolahan Salami in Port Harcourt ensuring the 2014 bronze medallists start on a good footing at the Stade August 4.

It was at the same venue, back in April 1997, that the Super Eagles greatly enhanced their chances of qualification for the 1998 FIFA World Cup, when defeating the Etalons 2-1 in a dramatic encounter.

Efforts by the host federation (FBF) to move Sunday’s match to 3.30pm, as against the 4pm communicated to the NFF, was opposed by NFF officials led by deputy director (competitions) Bola Oyeyode at the match coordination meeting.

Oyeyode, himself a CAF General Coordinator, produced the letter sent to the NFF by the FBF, to the effect that the match would start 4pm (5pm Nigeria time) and showed same to the Match Commissioner, Mr. Idrissa Sarr from Mauritania.

Sarr then ruled in favour of Nigeria.

The winner on aggregate will enter the pot for next month’s Draw for the 4th African Nations Championship, taking place in Rwanda 16 January – 7 February, 2016.