Oliseh on sick bed thanks Nigerians 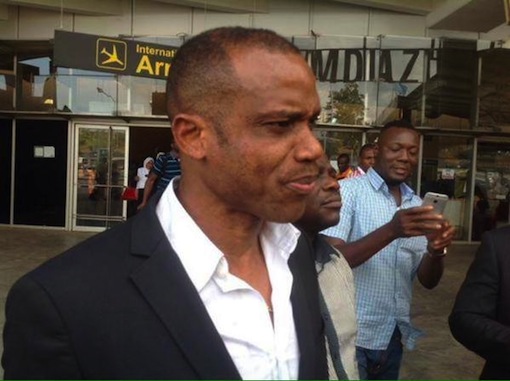 Recuperating Super Eagles handler, Sunday Oliseh has said that he is overwhelmed by the messages of support, well wishes and prayers he has been receiving from Nigerians.

Oliseh suddenly started feeling dizzy on Thursday in Port Harcourt and had to be excused from camp and allowed to travel to Belgium on the advice of the team medics.

Intensive tests were carried out on him at the Mediapark Klinic, Cologne (Germany) where doctors placed him on compulsory rest.

“I have been so touched and much moved, almost to tears by the prayers and good wishes I have been receiving from Nigerians. I want to thank them so much for the love and support.

“I was told I should have rested a lot more than I did after the initial illness I had when we concluded our Belgian tour earlier this month. The doctors have now made the rest a compulsory one. I believe that after the two weeks I would be fully recovered,” he explained.

Sunday Oliseh was discovered to have contracted a viral infection in his system and would need to be monitored during the period of rest to ensure complete recovery.

Meanwhile, the home-based senior team, Super Eagles B face Burkina Faso on Sunday in a crucial CHAN qualifier second leg in Ouagadougou with the players and coaches promising to get the recuperating head coach a ‘get well soon’ victory over their hosts.

Captain Gbolahan Salami said that the team are even more determined to get a win for Nigeria and Coach Sunday Oliseh.

“We want to win the game for Nigeria and we believe that securing the CHAN ticket will hasten the complete recovery of our head coach,” Salami said.

Coach Oliseh is expected to resume duties November 9, when the Super Eagles camp opens for the 2018 FIFA World Cup Round 2 fixture against Swaziland.