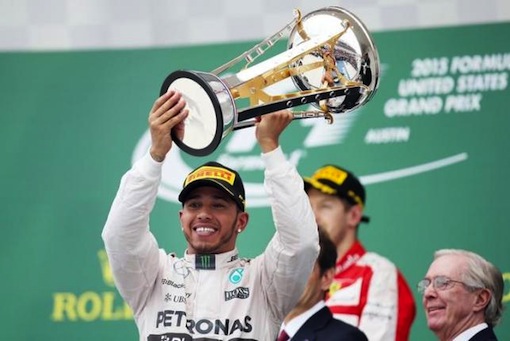 Flashback in 2015: In Austin, Texas, Lewis Hamilton raises his third F1 world title to the admiration of the cheering crowd

Britain’s Lewis Hamilton won a third Formula One world title on Sunday when he swept to victory in the United States Grand Prix.

The title was assured when closest rival Sebastian Vettel could only finish third in his Ferrari behind Hamilton’s Mercedes teammate Nico Rosberg.

“This is the greatest moment of my life,” said Hamilton over the car radio.

“Thank you so much for everything you guys do. To my family I love you all.”

The disappointed German finished second behind his Mercedes team-mate after starting from pole position and blamed himself for losing the race with an unforced error late in the race.

But, he added, Hamilton’s aggression at Turn One was “too much and one step too far” and said it was not acceptable.

“He was extremely aggressive at the start. We hit each other. Or should I say Lewis came into me, which is not good.”

Tags:   Formula One   Lewis Hamilton   US