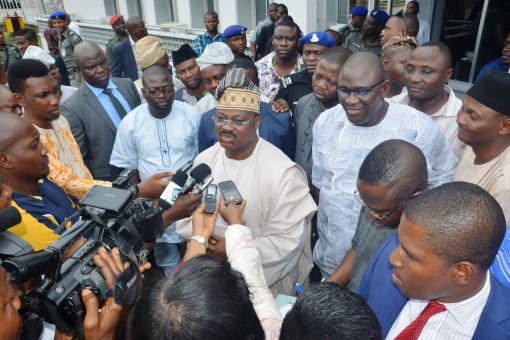 Oyo State Governor, Senator Abiola Ajimobi has hailed the judgement of the Oyo State Governorship Election Tribunal confirming his victory at the last governorship poll in the state.
In his reaction shortly after the judgment, Ajimobi said that the tribunal judgement had laid to rest all the innuendoes, evil machinations and falsehood spread across the state and beyond by his opponents after his victory.
He said, “I am of immense gratitude to God for this victory and for making it possible for me to break the second term jinx. I thank the good people of Oyo State for the confidence reposed in me by voting for me en masse for the second term in spite of innuendoes, evil machinations and falsehood by our opponents. Today’s judgment has strengthened my belief in the judiciary as the bastion of our fragile democracy and the bulwark of good governance.
“The judgment is not only a victory for my party, the All Progressives Congress, but also a victory for democracy and the rule of law. The road has not been smooth and it has been long but events have been encouraging and it goes to show that our faith has not been misplaced.”
Governor Ajimobi, who pledged not to betray the confidence reposed in him by the people of the state, said that he remained the “coordinating servant” of those seeking the progress and prosperity of the state.
While thanking the tribunal for doing a thorough job, he said that the thoroughness and industry put into the writing and delivery of the judgment was highly noteworthy after painstakingly poring through stacks of documents.
The governor said that from the outset, he was confident that he would emerge victorious, saying that the governorship election in the state was one of the most credible elections conducted on April 11.
He thanked the opposition for bringing out the best in him, saying if they had not taken him to court, all doubts might not have been erased about the credibility and fairness of the election that earned him a second term.
According to him, “I make bold to say that the petitioner (Accord Party) had no case in both content and technicality ab initio. Until you meet a bad man, you will not appreciate a good man when you see one. Now that the people have spoken; now that the court has affirmed it and now that God has destined it, our opponents should not oppose God. They should rather join hands with us to move Oyo State forward. I am taking this opportunity to call on all my brothers, Senator Adewolu Rashidi Ladoja imy ‘egbon’ (brother), that contested the election with me that we should move away from innuendoes. We must stop seeing Oyo State as a big village. We must move away from pedestrian politics and treat the state as a force to reckon with in the comity of civilized states.”
According to him, every citizen of the state, including his opponents, should be in the vanguard of taking Oyo State to higher pedestal, because the state is bigger than anybody.
Earlier while the tribunal was dismissing the petition of the petitioner, it declared, “The petitioner has woefully failed to establish his case.”
The chairman of the tribunal, Justice Mohammed Aliyu Mayaki who read out the tribunal’s unanimous verdict, had initially knocked off the evidence of Senator Ladoja’s principal witness, Mr. Bimbo Adepoju whose report of inspection of election materials used in the election would have provided strong foundation for the petition.
According to Justice Mayaki, Mr. Adepoju’s self confession that he is a farmer of arable crops, makes whatever evidence he might have given before the tribunal on the election documents, to be mere personal opinion since he(Adepoju) is not an expert.
On the issues relating to card readers, election documents and the rest, the tribunal stated that such issues could only be handled by knowledgeable experts because they are technical not a farmer of arable products, adding that for the witness (Adepoju) to have been a member of Accord, his inspection team could not be neutral and their report could not be relied upon.
The tribunal also faulted the allegations of non accreditation of voters, non voting and other malpractices alleged by the other 28 witnesses who testified for Senator Ladoja and Accord Party, declaring that all the allegations were not proved beyond reasonable doubts.
Justice Mayaki stressed that “the reliefs being sought cannot be granted. The election and return of Governor Ajimobi as the Oyo state governor is hereby upheld, having scored the majority of votes cast in the April 11 election. Accordingly, the petition is dismissed.”
Efforts by APC Counsel, Chief Wole Aina to seek for cost was not granted by the tribunal which ruled against any cost for all parties.
Lead Counsel to Senator Ladoja, Chief Richard Ogunwole, Chief Wole Aina, and Mr. Adebayo, M.O.( who stood in for Governor Ajimobi’s lead counsel, Chief Wole Olanipekun, SAN,) while reacting to the ruling, saluted what they referred to as the tribunal’s industry.