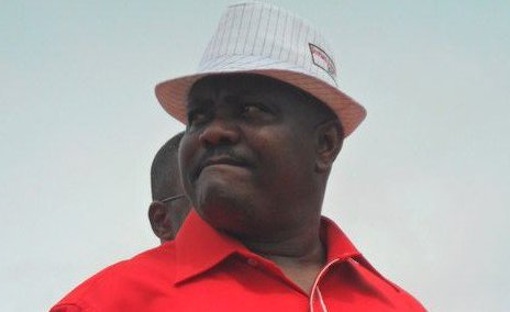 Nigeria’s Supreme Court on Tuesday threw out the application of Governor Nyesom Wike of Rivers State challenging the jurisdiction of the Rivers State Governorship Election Petition Tribunal to hear his case.

The Supreme Court dismissed his application and held that there were serious security challenges that warranted the relocation of the Tribunal in accordance with the provision of the constitution.

The Supreme Court also held that the Tribunal is properly constituted.

Wike had gone to court to challenge the jurisdiction of the tribunal which sat in Abuja, Nigeria’s capital, instead of Port Harcourt, the Rivers State capital, throughout its hearing.

The tribunal sat outside Port Harcourt due to fear of safety for the judges after widespread violence marred the governorship election of April 11, 2015 in the state.

It was because of electoral maplractices that the tribunal also anulled the victory of Nyesom Wike last Saturday and ordered for a rerun within 90 days.

Wike has said he would appeal the judgement.

Wike was dragged to the tribunal by the candidate of the All Progressives Congress, APC, Dr. Dakuku Peterside.

Meanwhile, the various tribunals have also nullified House of the Assembly election in 21 constituencies, including that of the Rivers State Speaker of the House of Assembly, Rt. Hon. Owaji Ibani from Andoni constituency.

Andoni is the same constituency of Uche Secondus, the Acting National Chairman of the Peoples Democratic Party, PDP.

Andoni is also the same constituency of Tele Ikuru, former Deputy Governor to Chibuike Rotimi Amaechi whom he betrayed and dumped on the eve of the Presidential election and defected from All Progressives Congress, APC,to PDP, and called APC people gangsters and terrorists.

Monday’s annulment leaves the PDP with only 11 seats at the House in the following constituencies: Oyigbo, Etche 1, Omuma, Ogu-Bolo, Ahoada West, Ahoada East 2, and Emuoha.

The House is made up of 32 members from 32 local government areas of the state.

With the annulment, the remaining 11 members of the House of Assembly whose elections were not annulled would be unable to form a quorum for making laws until they appeal within 21 days.