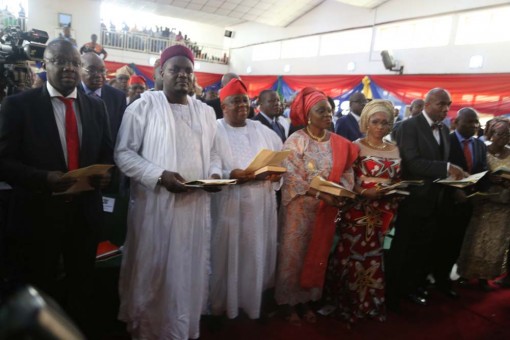 Barely two weeks after its composition, Governor Akinwunmi Ambode is leading the Lagos State Executive Council on a four-day retreat to fashion out the policy direction for the government with a view to serving the citizens better and moving the mega city forward.

The retreat, the first to be held in the administration of Ambode holds between Wednesday 28 and Saturday, October 31 and will provide a veritable platform for the executive council members to brainstorm on government policies, procedures and programmes and evolve better means of serving Lagosians.

According to a statement issued by the State Commissioner for Information and Strategy, Steve Ayorinde, the retreat would focus on three key issues of security, job creation as well as infrastructure development, which were the economic drivers of the Ambode’s administration.

“The retreat will also concretise plans to turn Lagos to a “smart city” where emphasis will be on creating alternative modes of transportation,” the statement said.

It stated that with the firm foundation laid in the past four and half months by Governor Ambode, particularly in the area of civil service restructuring, the cabinet is now ready to build on solid foundation already laid by executing policies that will keep Lagos ahead as the Centre of Excellence.

The statement added that the retreat would also be attended by the body of Permanent Secretaries and some select Head of Agencies.