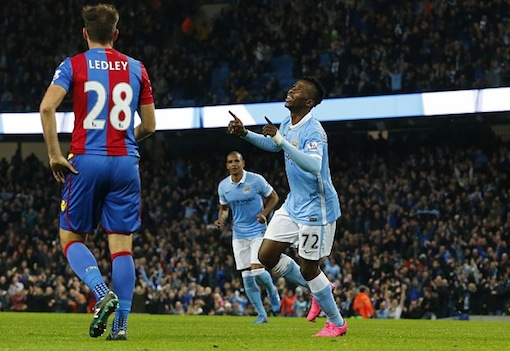 Nigerian teenager, Kelechi Iheanacho gets his name on the score sheet

Wilfried Bony put the Premier League leaders in front when he powered in a header, before Belgian De Bruyne slotted home a second at the far post.

He then set up provider Kelechi Iheanacho, who fired in the third.

Yaya Toure made it 4-0 from the spot and Damien Delaney headed in for Palace before Manuel Garcia slotted in late.

Following Tuesday’s League Cup shocks which saw Chelsea and Arsenal exit the competition, City fans might have feared the worst when Palace came to visit.

But once the teamsheet was announced, only the highly pessimistic among them would have predicted anything but a victory.

Manager Manuel Pellegrini left out Joe Hart, Raheem Sterling and Fernandinho but his ‘second string’ is almost as strong as their first. And against the visitors from London they rolled up their sleeves and produced a terrific attacking display.

Key to their recent successes has been midfielder De Bruyne, who has already gone a long way to justifying his £55m price tag.

He scored his sixth goal in nine games for City when he was picked out by Iheanacho and then supplied the pass for the teenager to score.

Palace will not want to see the precocious 19-year-old Nigerian again. His first ever City goal came at Selhurst Park earlier in the season and on Wednesday he scored one and set up another.

What was impressive about both key moments was the composure. For the De Bruyne goal, he looked up first and directed his ball into the path of the Belgian instead of a hit-and-hope across the six-yard area. And for his goal, he controlled De Bruyne’s firm cross before firing a low drive wide of keeper Wayne Hennessey.

If Wilfried Bony joined Sergio Aguero on the sidelines, then this teenager could confidently fill in the gap.

“He’s not just a finisher,” said Pellegrini. “He always plays with his head up. He can play behind the striker.”