NFF has abandoned my team, Siasia cries out 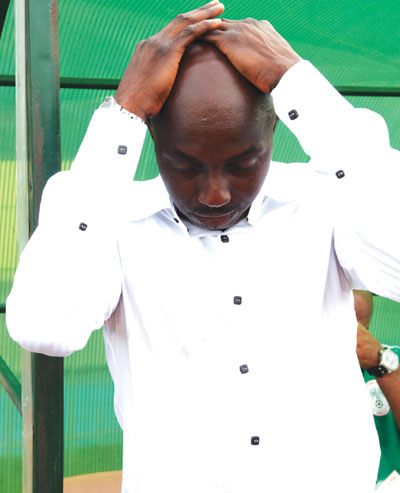 Chief Coach of Nigeria’s U-23 national team, Samson Siasia, has raised the alarm over Nigeria Football Federation, NFF’s insensitivity to the plight of his team as they prepare for the African U-23 Nations Cup which holds in Senegal next month.

The championship is the African qualifying tournament for the football event of Rio 2016 Olympic Games.

Siasia, one time coach of the Super Eagles, said that from all indications, the management of the NFF has abandoned his team to their fate with no resources at their disposal to prepare very well for Senegal 2015.

“Nobody from the football federation is concerned about our daily welfare in the camp. At times, we fuel vehicles to carry us to training. We have not been paid in the last three months, while we’re being owed allowances.

“The players in camp have not been consistent with the training programme because they have to go back to their clubs to play in the league. The players’ morale is down as most of them have not been receiving salaries from their clubs. How can one expect good output from these set of players?” Siasia lamented on a Lagos-based radio early on Wednesday.

Siasia, who played 51 international matches for Nigeria, in which he scored 13 goals, and was part of the team that participated in the 1994 FIFA World Cup and won the 1994 African Nations Cup, disclosed that his efforts to draw the attention of the NFF to the plight of his team yielded no results as response from officials was that the football federation is cash-strapped.

“Unfortunately, NFF keeps telling us that there is no money without giving reasons for this. To me, Nigerians are liars. It has gotten to the situation that I won’t just sit down quietly and die, I’m tired of the system.

“I want Nigerians to know at this juncture that I won’t be responsible for any bad result that may come out of our campaign in the African U-23 Nations Cup. I should not be held responsible for whatever happens at the championship,” said Siasia.

He called on President Muhammadu Buhari to bring the desired change to turn around Nigerian football and by extension Nigerian sports as a whole.