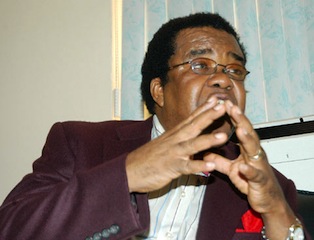 Prof. Bolaji Akinyemi, a former Minister of External Affairs and the Deputy Chairman of the 2014 National Conference, on Wednesday in Lagos recommended a two-party system for African countries as a possible solution to ethnic politics on the continent.

Akinyemi made the assertion as the key speaker at the 2015 Annual Lecture organised by Aelex Law Firm with the theme, “African Countries: Politics, Democracy and Ethnicity’’.

“This interpretation led to the opening of more realities for Africa leading to the breakdown of Sudan and Ethiopia.

“A two-party system, in my view, is a possible answer to the common problem of ethnic politics in Africa.”

Akinyemi said that ethnicity was not only an African problem, but a universal phenomenon, noting that the Balkans’ war was fought based on ethnicity.

Citing many examples of multi-ethnicity, Akinyemi said:“Very few countries in the world are uni-ethnic, the United Kingdom has had 73 Prime Ministers, 63 of which have been from Britain, 7 from Scotland, 1 from Wales and 1 from Ireland.

“Germany comprises 81 per cent Germans while the remaining 19 per cent have been various ethnicities,” the News Agency of Nigeria (NAN) quotes Akinyemi as saying.

Akinyemi added that Nigeria had tried to provide balancing in the issue of ethnicity in political appointments through the concept of federal character as provided for in Section 13 of the 1999 Constitution, noting that the provision had been abused.

Nwachukwu said: “African people have to grow beyond the resentment of one another.

“The 2014 National Conference brought solutions to this issue and provided balance to the ethnic problems facing the country.

“It retained power to the people and recommended copious amendments to the constitution without reference to creed, gender or ethnicity.’’

He, however, urged President Muhammadu Buhari to consider as a matter of priority implementation of the 2014 National Conference.

“I urge President Muhammadu Buhari to implement the recommendations of the 2014 National Conference.”

Ms Yemi Adamolekun, the Executive Director of Enough is Enough Nigeria, a civil society group, recommended that citizens should be properly educated in history and the arts.

She said: “Citizens should be properly educated to enable them ascertain their rights and history.”

Adamolekun, in her speech, agreed with Akinyemi’s call for a two-party system.

“I agree with Professor Akinyemi’s call for a two-party system but I do not think it should be legislated until we understand that the price of democracy is for the common good of others.”

Mr Theophilus Emuwa, the Managing Partner of Aelex Law Firm, in his address of welcome, said the annual lecture had provided a platform for national discourse on politics, business and law.

Emuwa said: “It is our hope that contributions of this discourse to the Nigerian society will be properly appreciated.”