Republican Paul Ryan elected US Speaker of the House 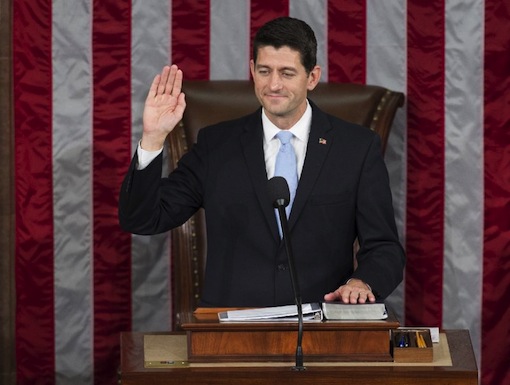 Newly elected Speaker of the House Paul Ryan, Republican of Wisconsin, takes the oath at the US Capitol on October 29, 2015.

Washington (AFP) – US lawmakers on Thursday elected Paul Ryan, a conservative Republican who helped steer budget and tax policy in Congress, as speaker of the House of Representatives, seeking to end months of political disarray.

Ryan, 45, now holds the most powerful job in Congress and is second in line to the presidency after the vice president, should the commander-in-chief be impeached or otherwise vacate the Oval Office.

The nine-term congressman from Wisconsin quickly called for returning the House to “regular order,” a nod not just to the Democratic minority, but to rank-and-file conservatives who had felt marginalized by Ryan’s predecessor.

“Let’s be frank. The House is broken. We’re not solving problems; we’re adding to them. And I am not interested in laying blame,” Ryan told fellow lawmakers after winning the vote.

“We are not settling scores. We are wiping the slate clean.”

Ryan’s victory puts a conservative ideas man at the helm of the House during a crucial period, following years of divisive Republican infighting and partisan gridlock that has earned Congress just a nine percent public approval rating.

“A lot is on our shoulders,” he said.

Ryan — who had agreed to take the job only if divided Republican factions would unify behind him — earned 236 votes in the 435-member chamber, becoming the youngest speaker since 1869.

Ryan earned an extended ovation and cheers from lawmakers and invited guests, including 2012 Republican presidential nominee Mitt Romney, who chose Ryan to be his running mate.

“I never thought I’d be speaker. But early in my life, I wanted to serve this House,” he said. “I thought this place was exhilarating because here, you can make a difference.”

President Barack Obama called Ryan on Wednesday after Republicans made him their nominee for speaker.

Although White House spokesman Josh Earnest acknowledged “significant policy differences” between Ryan and Democrats, he said the White House was “hopeful” it will be able to work with Ryan to serve the American people.

Ryan replaces Ohio’s John Boehner, who wielded the speaker’s gavel for nearly five turbulent years and announced last month that he would be stepping down by Friday.

Boehner resigned under pressure from rebellious conservatives in the party, revealing a deep rift between those lawmakers and the more establishment Republicans.

But before leaving, he secretly negotiated a sweeping, two-year budget deal with the White House that would clear the decks of any major fiscal crises for the new speaker.

The plan easily passed the House and moves to the Senate, where it appears to have the votes to pass this week although some are vehemently opposed.

That negotiation appears to have been a world away from Boehner’s epic fight in 2011 with Obama and Democratic leaders over raising the debt ceiling and reducing the deficit.

“I leave with no regrets. No burdens,” an emotional Boehner told his colleagues.

After the vote, the barkeep’s son who wound up serving in Congress for 25 years walked off the floor for the last time to thunderous applause. Democrats and Republicans alike smothered Boehner in hugs and kisses.

Pelosi had clashed bitterly with the speaker especially during crunch fiscal negotiations, but on Thursday she hailed Boehner as the “personification of the American dream.”

Ryan, who took the oath of office before a packed chamber, had served as the powerful chairman of the House Ways and Means Committee for the past year.

His supporters in Congress said they expect he will want to embark on major conservative programs as both parties gear up for the 2016 presidential election.

Ryan had been deeply hesitant to take the gavel.

But after number two Republican Kevin McCarthy dropped out of the speaker’s race, lawmakers including party leaders heaped pressure on Ryan to take the job, arguing he was the best man to unify the divided Republican camp.

Top Senate Democrat Harry Reid hailed Ryan as an intelligent and dedicated congressman who has shown willingness to be a “reasonable negotiating partner.”

But Reid said he hoped that the new speaker “will stand up to the extreme voices in his caucus.”