Why Buhari will not devalue the naira - Osinbajo 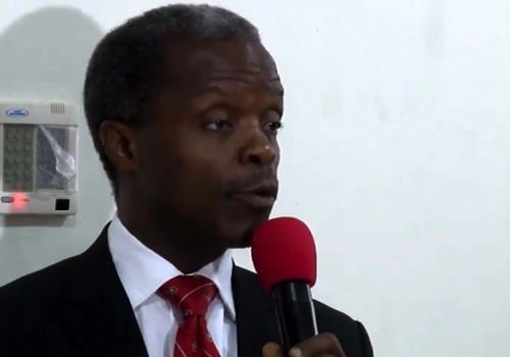 Nigeria’s Vice President, Prof. Yemi Osinbajo, has stated that devaluation of the naira is not an appropriate option in the current economic realities in the country, and offers no solutions as far as the Buhari administration is concerned.

President Muhammadu Buhari had earlier expressed his views that a further devaluation of the Nigerian currency is not healthy for the Nigerian economy. And speaking earlier today when he received Ambassadors from Italy and Canada among other callers in his office the Vice President spoke in a similar vein about the naira.

“I don’t agree on devaluation and it is not that I am doctrinaire about it. In the first place, it is not a solution-we are not exporting significantly. And the way things are, devaluation will not help the local economy,” he said.

According to him, “what we need to do is to start spending more on the economy and then things will ease up a bit.” He observed that the issues around the economy are no exact sciences, stressing that what is important is to be reasonably flexible in dealing with them.

He outlined federal government’s plans to set-up a $25B Infrastructural Fund which would be sourced from local and international sources including through Nigeria’s Sovereign Wealth Fund and also the pension fund among others.

The Vice President disclosed that already other sovereign wealth funds have indicated interest in the fund which would be used to address the nation’s decaying road, rail and power infrastructures. He said “this is our approach to speeding up the country’s infrastructural development.”

Prof. Osinbajo restated that the current foreign exchange restriction is a temporary measure to ensure that “we dont deplete our foreign exchange substantially,” at a time when the prices of oil in the international market is dropping. He added that the restriction is also to bring some stability to the country’s foreign reserves without which Foreign Direct Investment, FDI, might be affected.

In his reckoning, FDI is more forward looking than portfolio investments which is being affected by the decision to manage the foreign exchange resources of the country at this time.

“I am not sure devaluation is the issue, but how to ensure foreign direct investment which is more useful, ” the Vice President noted adding that he expects a bit more stability and direction in the next few months.

He disclosed that the federal government would work with the Central Bank of Nigeria to ensure that legitimate businesses are not badly impacted by the current foreign exchange restrictions, especially those who have previous contracts and loan commitments.

The Vice President received the Italian Ambassador in Nigeria, Mr. Fulvio Rustico and the Canadian High Commisioner in Nigeria Mr. Perry John Calderwood. Prof. Osinbajo expressed the appreciation of the federal government to both envoys on behalf of President Muhammadu Buhari and also looked forward to closer and deeper ties between Nigeria and the two countries.

A delegation of top executives from Citigroup led by Mr. Jim Cowles also paid a courtesy call on the Vice President earlier today.