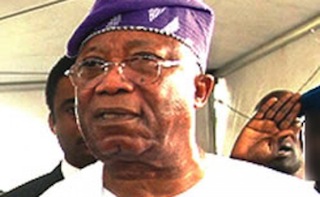 Chief Kessington Adebutu on Friday described the donation of a N50 million e-library to the Baptist Academy, Obanikoro, Lagos State, as a way of giving back to his alma mater.

Speaking on the sidelines of the 160th anniversary of the founding of the school, the philanthropist told NAN in Lagos that he benefited immensely from the college.

The school was established in 1855 by the American Baptist Missionaries.

Adebutu, who was represented by Mrs Taiwo Aje, his Senior Special Assistant at the occasion, said that education was very important to the development of the soul.

“Education is the food that can help a soul to achieve so much; feeding a soul does not necessarily mean food.

“If you educate someone, that person can do so much and the sky will be the person’s limit,” he said.

The chief said that he had a passion for effective learning and development.

“It is one thing to be educated and another thing for one to be learned and be developing; that is the reason for donating the library to the school.”

The businessman advised students to be studious and diligent.

The National President of the Old Students Association, Mr Tunde Onakoya, told NAN that the donor had made the promise in August 2012 and wanted it to be completed within one year.

He said that this was the first time an old student would do something for the school, which would serve as the old students’ monument in the academy.

“It is our monument and pride. So, whatever library that has existed before, this is a new phase and we are glorified in it,” Onakoya said.

The Principal, Mrs Abosede Ladoba, lauded Adebutu for the donation, describing it as a symbolic gift that would not be forgotten.

She said that her projection for the school in the next 10 years was to transform it to a world class school which had no equal in the country.

“It is because Baptist Academy has been destined by God.

“And it can be seen in the lives of the old students, and the present students are following their footsteps,” she said.