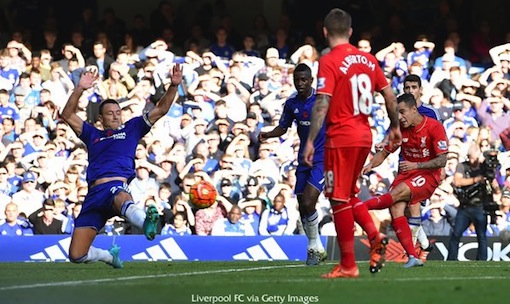 Coutinho drills the ball past Begovic to equalise for Liverpool

Losing at the Stamford Bridge was unthinkable in Jose Mourinho’s first term in charge of Chelsea but what used to be the fortress is now a losing ground as Liverpool confirmed that the Blues are beatable at home.

Mourinho has endured a torrid season so far and he seems closer to the exit after Phillippe Countinho’s brace and Christian Benteke’s strike gave the Reds a 3-1 win over the Blues.

Ramires’s strike in the fourth minute put Chelsea in cruise control but the performance of the team was not convincing despite their early lead.

Liverpool controlled the game for most part of the half and deservedly equalised when Coutinho dribbled Ramires and curled a beauty past Asmir Begovic in goal.

Liverpool were never going to take their leg of the pedal and Coutinho who was at the heart of everything his side did, added another to put a smile on Jurgen Klopp’s face.

Coutinho’s second was not only a beauty of a goal but one that exposed Chelsea’s defensive frailties.

Benteke who provided the assist for Coutinho to score his second, then rounded up Liverpool’s day by turning Chelsea defenders inside-out to finish coolly.