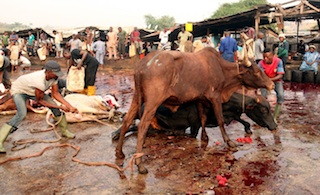 Butchers trying to drag down a cow for slaughter.

The Kaduna State Government on Monday said it was preparing the state abattoirs for privatisation and would send seven butchers on study tour in Saudi Arabia.

The State Commissioner for Agriculture, Dr Manzo Maigari, who disclosed this to newsmen, said it was a resolution of the state executive council at its meeting in Kaduna.

Maigari said the privatisation of the abattoirs would commence after full consultations with all stakeholders.

“As you are aware, the governor has approved study trips to Saudi Arabia for seven leaders of the butchers association state-wide.

“They will go and see how meat slaughtering is mechanised and handled in an Islamic setting.

“We want meat to be handled in a more Islamic way in the state,’’ the commissioner said.

According to him, when the seven butchers being sent abroad return, they will be consulted on the direction of the privatisation agenda, based on what they have seen and learnt in Saudi Arabia.

“We will encourage them to see if they can take over management of the abattoirs themselves, so that government will be left with the responsibility of regulation only.’’

Maigari said it was hoped that the study tour would be a pilot project that would open up the sector to private investors, create empowerment and generate employment in the state.

“We will standardise our meat to the global best practice standard,’’ he assured.

The commissioner noted that the standard of hygiene at the abattoirs presently was poor, and needed to be upgraded.

He said the state government had already established an interim state meat compliance committee to ensure that meat is handled in a hygienic manner at the abbatoirs.