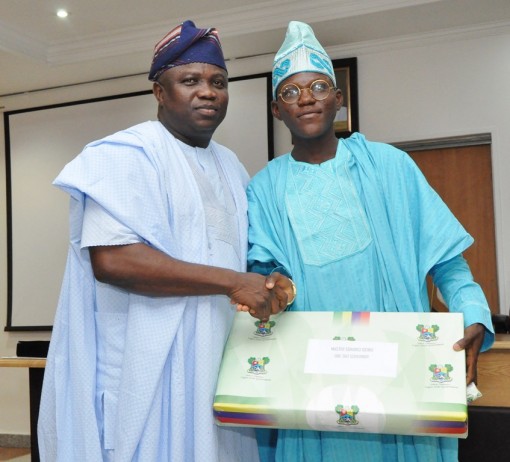 Lagos State Governor, Mr. Akinwunmi Ambode, presenting a gift to the One Day Governor, Master Idowu Sonoiki, during his visit to the Governor at the EXCO Chamber, Lagos House, Ikeja, on Wednesday, November 04, 2015.

Lagos State Governor, Akinwunmi Ambode, on Wednesday reaffirmed his administration’s commitment towards improving the quality of education in the State as the springboard of any development of any nation, just as he hosted the One-Day Governor, Master Sonoiki Ifeoluwa Idowu.

The Governor, who stated this while hosting the One-Day Governor, Master Sonoiki Ifeoluwa Idowu, in his office in Alausa, Ikeja, assured that his administration was favorably disposed towards making education of its people a priority, just as he expressed his appreciation of receiving the guests for the first time since the commencement of this present administration.

He commended the One-Day Governor and his cabinet for excelling in various examinations that produced them as the representatives and occupants of the number one seat in the state for a day.

The Governor also commended the winners of the various educational competitions in the state for establishing themselves as future leaders and assured that the State is committed towards keeping the education environment flying, while assuring the team of government’s readiness to cater for the One- Day Governor and his team.

Earlier, the One-Day Governor, Sonoiki Idowu had praised the governor for vacating his seat for him and commended Senator Oluremi Tinubu, the originator and founder of the Spelling Bee Competition that produced the One- Day Governor, for her initiative and vision.

He said that Lagos State educational system is worthy of emulation by all other states particularly with such programmes as the Spelling Bee competition, which has turned the lives of many students around, irrespective of tribe or religion.

He also noted that the programme has provided free education for both the privileged and less-privileged students and thus serve as leverage for the beneficiaries.

The One-Day Governor also encouraged his fellow students and friends to be more studious and determined so as to achieve greatness and excellence in their field of studies.

Urging all stakeholders in the education sector to strive towards achieving excellence, Sonoiki also called on the state government to encourage teachers and improve on their welfare for optimal performance.

Sonoiki, who urged the Governor to see to the clearing of the heaps of refuse in his school – Ikotun High School, also made personal requests for support to his family from the Governor.

Responding, Governor Ambode assured that he is committed to keeping a clean environment in all the schools across the State, and that he would swiftly act on the request.

He vowed to personally support all the winners, being the first set he would host as Governor.

“I’ve always looked forward to this day and I believe strongly that you will make Lagos proud. I want to assure you that we will do everything humanly possible to support you, “the Governor said.

Governor Ambode, who equally pledged that the other requests made by the One-Day Governor would be looked into and addressed, however, charged the winners to be good ambassadors of Lagos State, and spread the message that this present administration is committed to upholding the educational objectives of Lagos State.

Wife of the Lagos State Governor, Mrs. Bolanle Ambode, who had earlier hosted the One-Day-Governor and his cabinet at a breakfast meeting at the Lagos House, Marina, also commended them for their outstanding performance in the Spelling Bee Competition.

Mrs. Ambode reminded the One-Day-Governor and his cabinet that as future leaders, they must take their academics seriously, avoid bad company and remain focused for greater successes.