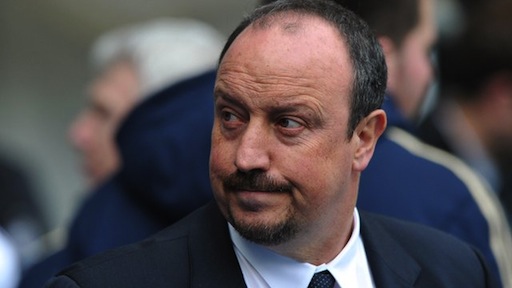 Real Madrid suffered their first defeat of the season as they squandered a 1-0 lead to lose 3-2 at Sevilla on Sunday.

Rafael Benitez’s men are now three points adrift of leaders Barcelona heading into the first meeting of the season between the two in two weeks’ time after Neymar scored twice in the European champions’ 3-0 win over Villarreal.

Sergio Ramos’s spectacular overhead kick had given Madrid the perfect start in Seville, but Ciro Immobile’s equaliser 10 minutes before the break turned the game on its head.

Goals after the break from Ever Banega and Fernando Llorente put Sevilla in the driving seat before James Rodriguez pulled a goal back in stoppage time.

“In the first-half we should have killed the game off and we didn’t,” said Benitez.

“We allowed them to score (the equaliser) from a set-piece and that conditioned the game.

“In the second-half we started well again, but from the second goal we started to commit errors and they took advantage of that to score the third.”

Gareth Bale returned for Madrid after a three-week layoff with a calf injury, but the Welshman once again failed to make a telling impact as Madrid suffered an untimely slip-up ahead of El Clasico.

Nacho was Madrid’s surprise match winner against Paris Saint-Germain in midweek and the full-back nearly claimed another collector’s item when he smashed a sweetly struck volley off the inside of the post on 11 minutes.

Madrid went ahead in even more spectacular fashion when Ramos connected perfectly with Isco’s corner with an overhead kick that flew into the bottom corner.

However, in scoring the goal Ramos suffered a recurrence of a long-running shoulder injury problem and had to be replaced by Raphael Varane.

Madrid were punished for failing to build on their dominance in the first half hour when Immobile pounced on a loose ball at the back post
from Yevhen Konoplyanka’s corner to fire home his first Sevilla goal.

Sevilla built on the momentum with which they ended the half after the break and went in front thanks to a team move of great quality as Konoplyanka and Immobile exchanged passes before the Ukrainian picked out a low cross for Banega to sweep home.

That goal shocked Benitez’s men into action as Cristiano Ronaldo and Bale fired just off target before Sergio Rico produced an incredible stop to deny Casemiro’s header finding the net.

And that proved to be the turning point in the game as Sevilla went straight up the other end and Mariano Ferreira’s cross was powered home at the near post by Llorente.

Rodriguez was making his first appearance in two months as a substitute and the Colombian showed what Los Blancos have missed as he found the bottom corner from 25 yards, but it was too little, too late for the visitors.

At the Camp Nou, Neymar and Luis Suarez once again shone in Lionel Messi’s absence as Barca overcame some stiff first-half resistence from Villarreal to record a fourth consecutive league win.

Neymar opened the scoring on the hour mark when he slotted home Sergio Busquets’s through ball.

The Brazilian then stood aside to let Suarez seal the three points from the penalty spot after Munir El Haddadi had been brought down by Jaume Costa.

The best was yet to come from Neymar, though, as he collected Suarez’s pass and lifted the ball over Costa before turning to fire home on
the volley five minutes from time.

“I am happy with what I am giving the team, but I still think I can improve more,” Neymar told Canal Plus.

“As a team we all have to keep growing, but now we can rest and think about El Clasico.”

Between them Suarez and Neymar have compensated for Messi’s injury layoff with knee ligament damage by scoring all of Barca’s last 17 league
goals as the Catalans have dropped just three points since the Argentine went off injured against Las Palmas six weeks ago.

Atletico Madrid remained in the title hunt thanks to Antoine Griezmann’s 93rd minute winner as they squeezed out a 1-0 win over Sporting Gijon to stay four points behind the leaders.

Athletic Bilbao moved into the top half of the table with their fifth consecutive win as 21-year-old sensation Inaki Williams struck a wonder goal in a 3-1 win over Espanyol.