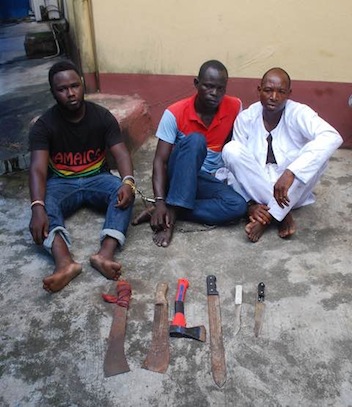 The three suspected thieves arrested by the RRS

The efforts of the operatives of the Rapid Response Squad, RRS, Lagos State Police Command, to rid the state of crime and criminal activities paid off on Saturday evening when the operatives swooped in on a criminal hide out in Bourdillon, Ikoyi area of Lagos and arrested three robbery suspects with weapons while others escaped.

Items recovered from the arrested suspects according to the police, include four cutlasses, axe and iron rod.

The police alleged the suspects were rounded up at their hide out following a tip off by concerned members of the public that some suspects were perfecting plan to rob motorists and commuters in traffic.

During interrogation according to the police, one of the suspect, Jamilu Musa from Jigawa state allegedly denied being a robber, but that he knew the first suspect, Joseph Edem to be a robber who usually operates with about fifteen others to rob people of their belongings in the area.

“I am not a robber, I sell second hand goods in the area to survive but I know Joseph Edem to be a robber who with about fifteen others rob motorists of their belongings in the area.

“And I always watch the robbers from a distance share their loots after their operations,” Musa allegedly told the police.

But when he was asked why he did not report his observations to the police, Musa could not provide any answer.

In a statement released, the hard working commander-in-charge of the RRS, ACP Olatunji Disu said; I deployed my crack team to arrest the suspects following a complaints by members of the pulic of incessant robbery attack inside the traffic along Ikoyi axis.

“We will not rest on our oars until we flush out criminal elements from Lagos State to ensure residents transact business in a conducive environment and sleep with their two eyes closed everyday, adding that, after investigation, the suspects will be charged to court.