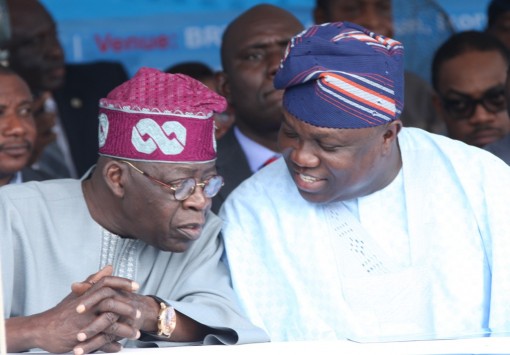 National leader of the All Progressives Congress (APC), Asiwaju Bola Ahmed Tinubu on Thursday described Lagos State Governor, Akinwunmi Ambode as an epitome of creativity, intelligence and honesty in governance.

Tinubu, who spoke in Ikorodu at the official flag off of the SMART Transportation For Lagos Campaign, described Ambode as a man who is extremely gifted in providing solutions to problems, no matter how daunting the challenges.

Tinubu, who is also a former Lagos State Governor, recalled how Ambode provided solutions to the financial crisis which engulfed the state during his tenure between 1999 and 2007 when the then Federal Government seized the monthly allocation of Lagos for 23 months.

He said as Accountant General of Lagos State, Ambode, along with others, provided solutions to the quagmire and lifted the State out of financial crisis.

“He (Ambode) never gave excuses; he was always ready with solutions. He is a bundle of creativity, intelligence and honesty in governance.”

“When we were thinking of whom to succeed Babatunde Raji Fashola as Lagos State Governor, Ambode himself never thought about it; we sought him out and I’m proud to be a grandfather.”

“I have many of them who are extremely gifted and talented and I have no doubt that Fashola will succeed even as Minister. You can see portfolios they gave to our people here; the government is now put together by our chosen president to move Nigeria forward and I can conveniently say that Nigeria is in good hands,” Tinubu said.

Meanwhile, Lagos State Governor, Mr. Akinwunmi Ambode shortly before formally commissioned the Bus Rapid Transit (BRT) extension project and flag off of the 434 new BRT bus operations, expressed optimism that it would bring comfort and convenience to commuters in the state.

He said the BRT system which was initiated as part of the strategies to modernise the public transport system, has to a large extent lived up to expectation since the launch of the first BRT system in March 2008 along the Mile 12 – CMS corridor.

The Governor said that the 22 km BRT corridor has moved over 250 million passengers in the last seven years, adding that the extension is an improvement on the shortcomings noticed on the Mile 12 to CMS corridor. This upgraded system, known as the BRT classic with the BRT lanes running in the median will provide better service in all ramifications.

The Governor said the development was another demonstration of his administration’s commitment to effectively address the issue of traffic congestion and ensuring significant improvement in public transportation in the State.

“This government is committed to improving on the road transport network, the water transportation system, the public transport infrastructure and most importantly attract the needed investment to fund our Strategic Transport Master Plan (STMP), which is already being implemented”.

“As part of this vision, we are working towards commencing operation of the first phase of the Blue Line Rail Project in the next 12 months so that Lagosians will start to feel the benefits of a world-class rail system”, he said.

He commended the operator of the Mile 12 to Ikorodu BRT extension for investing in the acquisition of about 434 buses for the extension and the financial institution which provided the funds for the operation.

He also commended the efforts of the Lagos Metropolitan Area Transport Authority (LAMATA), for delivering the project as well as other stakeholders who were involved in the project.

Governor Ambode also seized the occasion to acknowledge the efforts of former governors, Asiwaju Bola Ahmed Tinubu and Mr. Babatunde Fashola, under whom, he said the project was conceived, initiated and substantially implemented.

Also speaking earlier at the event, State of Osun Governor, Ogbeni Rauf Aregbesola commended Governor Ambode for his acidity and steadfastness in keeping faith with the vision of the progressives and keying into the developmental agenda for Lagos laid by Tinubu and continued by Fashola, former Lagos State Governor, who is now Minister of Power, Works and Housing.

Aregbesola said as Governor of Lagos, which is almost half of Sub-Saharan Africa, the enormity of the job of governing the state was indeed gargantuan, because a Governor of Lagos can comfortably lay claim to being president of more than 20 African countries.

Aregbesola also recalled out the BRT project was conceptualized and actualized by a team which Tinubu put together, to which he was a member.

He recalled that the team visited London, Brazil, Ecuador and Columbia, and that at inception it was a tall order which many never believed in its success, but that he was happy that the project had become a reality.