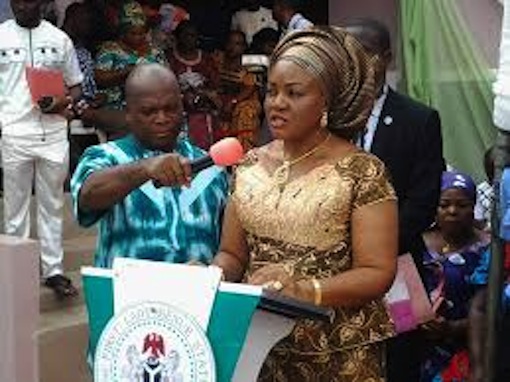 Mrs Eunice Ortom, wife of Benue State Governor, on Sunday, said that the state was now ranked ninth in the current HIV/AIDS prevalence rating in the country.

Ortom, who is also the Chairman, Board of Governors for Benue State Aids Control Agency (BENSACA), said this during the launch of the “Guinness World Record on HIV Test” in Markurdi.

NAN reports that the HIV/ AIDS prevalence rate by states in Nigeria was published by National Agency for the Control of Aids (NACA) after the 2013 National Aids Reproductive Health Survey.

The rating also came as a result of test carried out on persons living with HIV/AIDS.

It showed that Rivers with 15.2 per cent topped the new prevalence chart, as Taraba with 10.5 per cent is second, while Kaduna has 9.2 per cent to be on the third.

Nasarawa, FCT, Akwa Ibom, Sokoto and Oyo are on the fourth, fifth, sixth, seventh and eighth spots respectively on the prevalence rate chart.

She said Benue had over the years been rated highest in HIV and AIDS prevalence, adding that with such laudable HIV test event, it was indicative that the journey to achieving zero case was “just a mile away”.

She added that “Benue had the highest HIV/AIDS prevalence rate in Nigeria, but due to the dedicated and collaborative efforts of BENSACA and other partners, the state had been lifted to be the ninth in the country.

“Our focus over the years is to get to zero prevalence, which implies zero infections, zero HIV-related deaths and zero discrimination against persons with the virus.

The BENSACA chairman quoted a World Health Organisation (WHO) report which indicated that7,000 persons were newly infected with the virus everyday in spite of the global adoption of getting to zero case.

She said AHF planned to break the Guinness World Record on HIV test by testing 10,000 persons and issuing results to all in eight hours, thereby ensuring that people got access to testing and counseling services as urgently as possible.

The governor’s wife said “the concept of testing 10,000 persons and producing results within eight hours is, therefore, not just an exercise for the purpose of breaking the Guinness World Record, but to send a strong message to the world.

“The message is that testing is the first step to prevention and treatment of HIV and AIDS and everyone needs to know his or her status.”

In achieving zero prevalence, Mrs Ortom said, it was critical to target epidemic hot spots in mega cities to ensure equitable access to quality, cost effective HIV prevention and programmes, among others.

She said that the policy statement of UNAIDS and WHO noted that HIV testing must be anchored in a human right approach that paid due respect to ethical principles.

Ortom added that in developing counties like Nigeria, home-based HIV testing and counselling was an emerging approach toward addressing confidentiality issues.

According to her, HIV test must be confidential and must be accompanied by counselling for those who test positive with the informed consent of the person been tested.