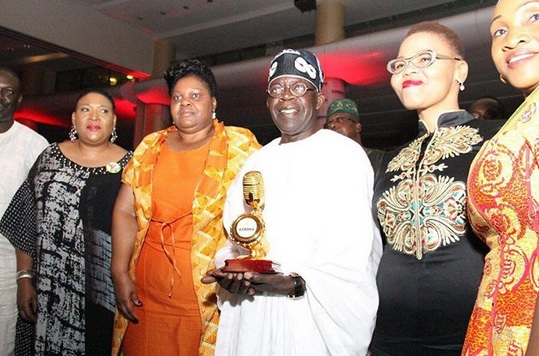 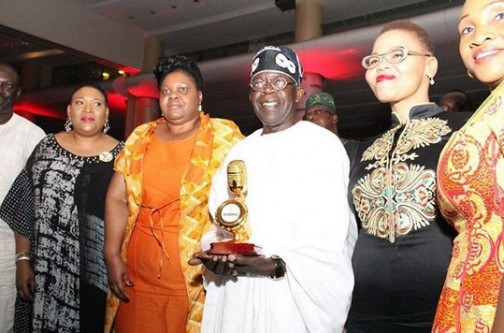 Asiwaju Bola Ahmed Tinubu, former governor of Lagos State has called on African youths to develop their full potentials in arts and culture to deal with the problem of poverty on the continent.

Tinubu made the appeal on Sunday night while making remarks after been honoured as the “Pillar of African Art and Culture” by the African Union, AU at this year’s edition of All Africa Music Awards, AFRIMA held at Eko Hotel & Suites, Lagos.

“There’s no doubt that art and culture can be used to tackle poverty in Africa. We have seen the economic opportunities of our talented youths blossoming. In the last five years, their contributions to Nigeria’s Growth Domestic Product, GDP through art and culture have improved tremendously. The contribution of our artists is a phenomenon now and we can take the advantage to tackle the scourge of poverty,” Tinubu told thousands of ross sections of guests.

The former governor, who expressed his appreciation to the African Union Commission for the honour, said AFRIMA has shown there are sense of cultural variables that can be appreciated in the African diversity. And that the award organisers has demonstrated how Africa talents can be brought together to promote peace, wealth and prosperity.

He then reiterated his belief in Africa Renaissance and urged the youths on the continent to change the narrative.

He continued, “It should no longer be the stricken, hungry children, infested by famine and destitution that should be the face of Africa. We have seen the faces of talents here who have worked hard and if we forged together, we can bring Africa back with pride, talents and culture. So, I believe in what you believe. You believe in what I believe. We all believe that Africa will continue to be great, we have paid the price of place across the world and the greatest amplifier of that greatness are the culture and talents of all of you,” the national leader of Nigeria’s ruling party, All Progressives Congress, APC summed.

And it was an historical night for the East African artistes inside the Eko Convention Centre as they won in most of the coveted award categories. Tanzania’s Diamond Platnumz was the biggest winner of the night as he took home three awards notably the Artiste of the Year, Song of the Year award and Best Male Artiste in Eastern Africa.

The 26-year old singer beat top Nigerian acts including Davido, Wizkid, Olamide and Yemi Alade in the Artiste of the Year and Song of the Year Award categories. He had earlier in the year defeated Davido and Yemi Alade to clinch the title of Best African act at the 2015 MTV EMA.

Some of this year’s big winners who received the 23.9 karat gold-plated trophy also include South Africa’s rap star Casper Nyovest, who copped the award for the Best Male Artist in South Africa and also the Best Artist in African hip-hop; his compatriot Busiswa Ngoku was the Best Female Artiste in South Africa; Charlotte Dipanda won Best Artiste in African Contemporary, and her “Elle n’a pas vu” clinched the Album of the year; Ghana’s Wiyaala won Video of the year; and Equatorial Guinea’s Betty Akna copped Best Female Artist (Inspirational) trophy.

YBNL’s Adekunle Gold is AFRIMA 2015 Revelation of the year while Kiss Daniel won the Most Promising Artist in Africa. South Africa-based Nigerian Instrumentalist, Kunle Ayo is the Best Artist In African Jazz.

Olamide drew the curtain on the show with an outstanding performance of his several hits.