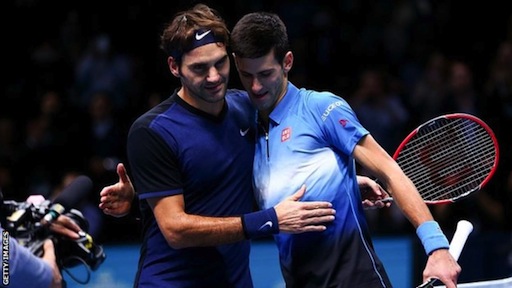 The Swiss six-time champion won 7-5 6-2, ensuring he will progress from the group stage with one match remaining.

Djokovic, winner of the past three season-ending titles in London, had won his previous 38 indoor matches.

The Serb will play Tomas Berdych in his final group match on Thursday and can still qualify for the last four.

Federer will play Japan’s Kei Nishikori, who beat Berdych 7-5 3-6 6-3 in the afternoon session.

“It’s always a thrill to come out here, even more so against a great player like Novak,” said the 17-time Grand Slam champion.

“It’s a special night for tennis, and a cool atmosphere.”

The packed O2 Arena crowd of more than 17,000 spectators was largely behind Federer, as ever, but even the 34-year-old’s most diehard fans must have been surprised by a straight-set win.

Djokovic, 28, had not been beaten anywhere since he lost to the Swiss in Cincinnati three months ago, and the world number one’s last defeat at the O2 came in 2011.

His form dipped dramatically after a tight first set, with the Serb winning just 25% of points on his first serve and searching for his usual metronomic accuracy.

“You have those days when you are not feeling your best, not even close to the best,” said Djokovic.

“Credit to Roger for mixing up the pace, giving me always a different ball. He used the slice and spin very wisely. He served very efficiently.

“I made a lot of, lot of unforced errors. I just handed him the win, especially in the second set.”

Federer had to fend off a break point in the opening game but the next 40 minutes saw both men dominant on serve.

With a tie-break looming it was Federer who made the decisive move, missing a forehand on his first set point but playing a fabulous half-volley to convert the second.

A rash of attacking returns saw the Swiss move into a 2-0 lead in the second set but he then handed it straight back with an edgy service game.

The expected Djokovic fightback did not materialise though – instead the Serb played a dreadful service game and could only watch as a rasping Federer backhand made it 4-2, a lead he would not relinquish.

“The tactic was to mix it up, I have to against Djokovic,” said Federer. “I hit it well out wide today. I knew it was an important serve to get Novak off the court.”