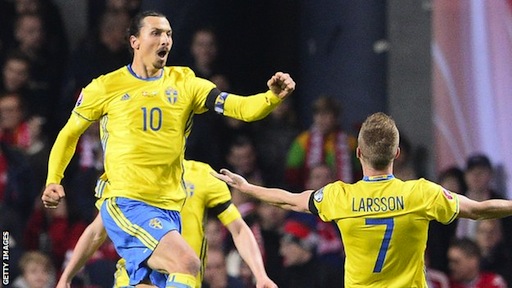 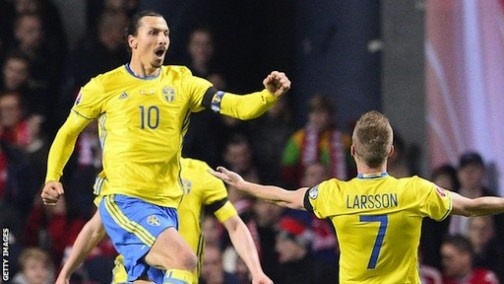 Leading 2-1 from the first leg, the visitors extended their advantage through Ibrahimovic’s scruffy first-time shot from Kim Kallstrom’s corner.

Ibrahimovic clipped in a 25-yard free-kick to all but clinch a finals spot.

Denmark levelled on the night through Yussuf Poulsen and Jannik Vestergaard, but fell two goals short on aggregate.

Following Ibrahimovic’s two away goals, the 1992 European champions needed to score at least four times in Copenhagen to avoid being eliminated after scoring just once themselves in Sweden.

Despite their late rally, it proved a task too far for the Danes as veteran coach Morten Olsen’s 15-year reign came to an end.

Olsen’s side dominated the opening exchanges, but were left deflated when Ibrahimovic peeled off his marker to convert Kallstrom’s well-worked corner.

Sweden looked in complete command from that point and, although the Danes restored some pride, the visitors managed to earn a measure of revenge for the 2010 World Cup play-off defeat by their Scandinavian rivals.