Woman blows self, as raid on terrorists mount in Paris 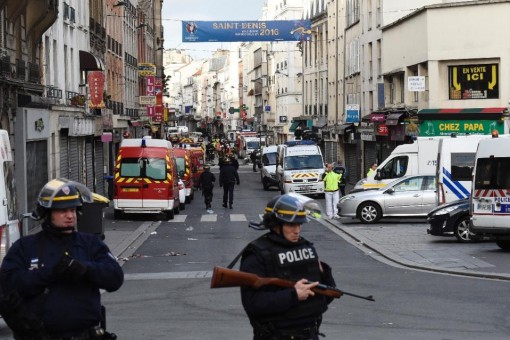 Two suspected jihadists were killed, including a woman who blew herself up, in a shootout Wednesday in north Paris with police hunting the mastermind of last week’s attacks on the French capital, sources said.

As troops patrolled the streets, heavily-armed police swapped gunfire with people holed up in an apartment in the suburb of Saint-Denis, police sources said.

Two people in the apartment were killed, including a woman who blew herself up, and a third was still inside, and at least three police were injured, they said.

Two arrests were made.

The operation aimed at the suspected mastermind of Friday’s deadly attacks in Paris, Belgian Abdelhamid Abaaoud, who has been active with the Islamic State group in Syria, the source said.

The raid began before dawn, at around 04:30 am (0330 GMT), on an apartment at the crossroads of Rue de la Republique and Rue Corbillon.

The area is home to the Stade de France, one of several places hit by gunmen and suicide bombers on Friday in the worst ever attack on French soil, which was claimed by the Islamic State jihadist group.

The coordinated assaults killed 129 people and injured more than 350, some of them critically.

A local resident who identified herself as Alexia told AFP she heard shots, “‘booms like grenades and then intermittent bursts” of gunfire”.

“I heard bursts of machine gun fire,” said Reda, a taxi driver. “I got out (of the car), masked policemen stopped us and told us to leave.”

The raid came as Europe was placed on high alert after footage from the scene of one of Friday’s attacks revealed a ninth suspect may have taken part.

It was not clear if this ninth man was one of two suspected accomplices detained in Belgium or was on the run, potentially with 26-year-old fugitive Frenchman Salah Abdeslam who took part in the attacks with his suicide-bomber brother Brahim.

Police also carried out raids in southwestern France, in Ariege, Toulouse and the department of the Haute-Garonne.

The operations were part of an anti-terrorism strategy and not the probe into the Paris, an investigator told AFP.

French President Francois Hollande on Wednesday will hold a meeting to discuss proposals to extend by three months the state of emergency declared after the worst attacks in French history. It will then be put to vote by lawmakers Thursday and Friday.

In a sign of the nervousness gripping Europe after Friday’s carnage, a football match between Germany and the Netherlands was cancelled Tuesday and the crowd evacuated after police acted on a “serious” bomb threat.

As police stepped up the hunt for the fugitives, French and Russian jets pounded IS targets in the group’s Syrian stronghold of Raqa for a third consecutive day.
France and Russia have vowed merciless retaliation for the Paris attacks and last month’s bombing of a Russian airliner, also claimed by the Islamic State group, which have galvanised international resolve to destroy the jihadists and end Syria’s more than four-year civil war.

“It’s necessary to establish direct contact with the French and work with them as allies,” Russian President Vladimir Putin said as France prepared to send its aircraft carrier, the Charles de Gaulle, to the eastern Mediterranean on Thursday.

Hollande will meet Putin in Moscow on November 26, two days after seeing US President Barack Obama in Washington.