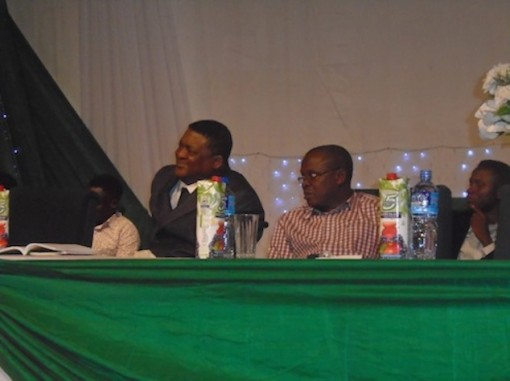 Barr. Mohammed Fawehinmi, the son of the late human rights activist, Gani Fawehinmi believes that Governor Ajibola Ajimobi of Oyo state and other southwest governors should be impeached due to poor infrastructures in the region.

Fawehinimi voiced his suggestion on Thursday at the second edition of the Public lecture organized by the Students’ Union of Obafemi Awolowo University in the memory of his late father, Gani Fawehinmi, held at Oduduwa Hall, OAU Ile-Ife.

“Free and fair election will come and go, what matters is what the people benefit. I passed through Ibadan while I was coming and under normal circumstances I would have recommended that Governor Ajimobi be impeached. Ibadan is in the worst state I can possibly see it because five years after, nothing has changed. I came to Ife, the only admirable thing that I see is the bronze head (Ori Olokun) and passing through Fajuyi hall, the whole place is a shadow of itself. Fajuyi hall is a historical monument and it should not be like that,” he said.

Fawehinmi further advised Great Ife students to lodge their complaints by putting it in a book format, which will be sold to the right quarters. He applauded OAU as a great institution whose doggedness earned his late father the Senior Advocate of Nigeria (SAN) after several years.

“I urge the Students’ Union of Ife, to put those buildings that are dilapidated into photographs and put them into a book, sell it to the president and other appropriate quarters, you will meet your people there. Ensure that you have evidences to prove your complaints and the newest lawyer from the law school will win the case for you.

The Gani Fawehinmi public lecture, which was titled “The Crucial role of Youths in Determining Free and Fair Election”, was attended by various dignitaries.

Olorode who also spoke at the lecture, vehemently raised the consciousness of Great Ife students by delineating the role of youths in a democratic state.

He stated that class struggle is a major problem of this country and state’s power has been a major distortion to the national development. “Your major task as Nigerian youths is to understand the concept of democracy, with that you will be able to question certain things that are wrong in the country.

“The class struggle between the strong and the weak is a major problem that the world is facing. Some set of individuals control the wealth of this nation, which they consequently use to distort state’s development,” he explained.

OAU students who attended the public lecture came with high expectation of meeting Barr. Femi Falana, who was reported to be unavoidably absent.