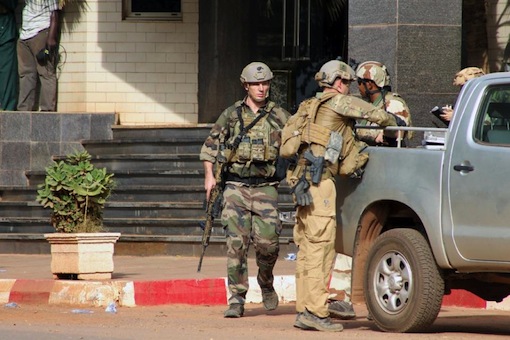 Local and international soldiers stand guard in front of the Radisson Blu hotel in Bamako on November 20, 2015
Photo: AFP

Mali’s government declared a 10-day nationwide state of emergency Friday evening after a jihadist attack on a hotel in the capital Bamako that left least 27 people dead.

Following a crisis cabinet session presided over by President Ibrahim Boubacar Keita the government “declared a state of emergency across the nation” starting at midnight Friday for 10 days, a statement read on national radio said.

It also called for three days of mourning for the victims of the attack, which was claimed by the Al-Murabitoun group of notorious Algerian militant Mokhtar Belmokhtar in an audio recording broadcast by Al-Jazeera television.