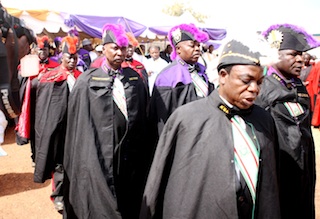 Catholic faithful in Umuchu town in Aguata local government of Anambra State, southeast Nigeria, have been thrown into mourning after their priest slumped on the church altar and died while celebrating mass.

The priest, Rev Father Emmanuel Idika, slumped at Our Lady of Fatima parish in Umuchu while he was conducting mass.

After he slumped, church workers rushed to the altar and took him to a hospital but before doctors could attend to him, he was dead.

The 82-year-old Idika who hailled from Umunze in Orumba South in Anambra, was posted to the parish after he retired from active priesthood.

He volunteered to assist other priests to celebrate mass.

On the day the incident happened, Idika went to the church to conduct mass before he slumped right in front of the congregation.

According to eye witnesses, half way into the service Idika fell down on the altar and became unconscious.

The incident threw the congregation into confusion and the mass ended abruptly.

His corpse was later deposited at the Visitation Hospital mortuary in Umuchu.

Some of the parishioners who spoke to our correspondent said the late Idika lived a good life throughout the period he was active as a priest.

They prayed that God should accept his soul.