How Ambode saved me from death - 76-yr old journalist 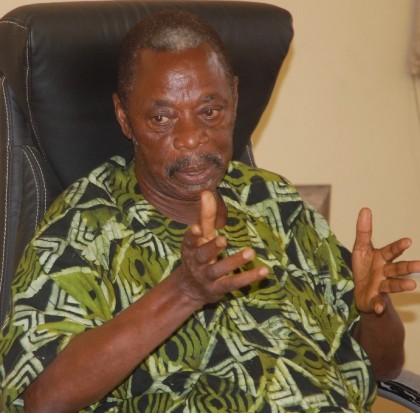 Veteran journalist, 76-years old Alfred Ilenre says he may have died if Lagos State Governor, Akinwunmi Ambode did not come to his rescue.

Ilenre had a collapse in his left lung, which doctors say could lead to the death of anyone at anytime.

On 12 June, 2015, during the celebration of June 12, Ilenre was supposed to deliver a goodwill message but as he approached the podium, he blanked out.

Ilenre, who is now Secretary General, Ethics Minority and Indigenous Rights Organisation of Africa, EMIRAF and Chairman, Coalition of Democratic Formation, spoke to journalists in Alausa, Ikeja, Lagos, Southwest Nigeria to show appreciation to Ambode for coming to his aid.

He said on June 12, Ambode noticed his condition and immediately detailed a medical doctor to take care of his health.

Ilenre stated that he got a call from one Dr. Adeboye who said the governor ordered her to know details of his health.

He said 12 diagnostics were carried out on him to know his particular ailment, with the report forwarded to the governor.

Ilenre said he had a ghastly motor accident in 1997 on his way from Ghana to Benin to connect flight Guinea Bissau for a conference, saying that the accident might have affected his lung.

“I never knew the governor before or had anything to do with him. What he did to me is great, I feel that I must let people know what the governor did for me.

“After the series of x-rays, I was told that my left lung has. Collapsed and that it can lead to one dropping dead at anytime,” he said.

He disclosed that he received treatment from the Beijing hospital in Ghana where he spent six weeks on intensive medical treatment where he was given the best, saying such treatment could not be quantified in monetary terms.

According him, for the governor to have saved his life by sending him to a Chinese hospital in Ghana for such treatment, he would never forget such gesture and thanked Ambode the gesture extended to him.