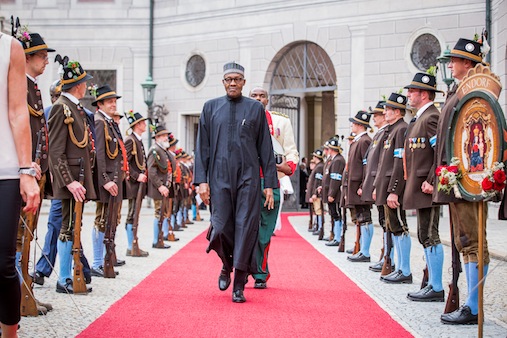 Nigeria’s President, Muhammadu Buhari will storm Lagos on Friday to handover the three patrol helicopters, 31 Armoured Personnel Carriers, APCs and other security equipments purchased by the Lagos State Governor, Akinwunmi Ambode to the police to protect the state.

A statement from the Commissioner for Information and Strategy, Steve Ayorinde the Lagos State Government will formally welcome President Buhari to the state on Friday, November 27 at a ceremony that will mark the rebranding and repositioning of its Rapid Response Squad (RRS).

The visit will be President Buhari’s first official visit to the state since he assumed office six months ago.

The statement said Buhari would be the special guest of honour at the Lagos House, Alausa in Ikeja, to formally commission the three helicopters, patrol vehicles, power bikes and other security gadgets acquired by Governor Akinwunmi Ambode-led administration to beef up security in the state through the RRS.

It stated that Buhari’s visit would further witness the rebranding of the RRS as the state’s no-nonsense police response squad against crime and criminality, adding that the President will also join Governor Ambode in handing over the brand new patrol equipment to the Police authorities in the state.

Ayorinde said Friday’s ceremony would underscore the seriousness of the Lagos State Government in ensuring the security of lives and property, saying: “With these security equipment, Governor Akinwunmi Ambode has demonstrated his firm commitment and ability to safeguard the lives and property of every Lagosian.

“The government is convinced this gesture will further boost the morale and capacity of the Police, RRS and other security agencies in the state. It is an attestation to the efficacy of the state’s Security Trust Fund and we believe that this will send a clear signal that criminals and armed robbers no longer have hiding place in the state as government will spare no effort in ridding the state of every form of criminality,” he said.

The statement added that the deployment of the security gadgets would further complement the efforts of the State Government in making the state a mega city that is working for all and sundry.

“It is noteworthy that the Lagos State Government has stepped up its enforcement of traffic laws and declared zero tolerance on potholes on the roads, a decision that has brought to 282 the number of roads so far rehabilitated in the past five months while another set of 189 roads has been marked for repairs before the end of the year,” he said.

All these, Ayorinde noted, have not only improved the free flow of traffic in the state but have equally reduced the incidence of robberies in traffic.