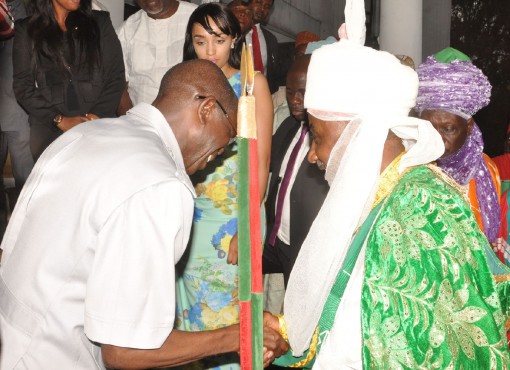 Governor Adams Oshiomhole in a handshake with the Emir of Kano, Muhammad Sanusi during the Emir's visit to the governor in Benin Wednesday

The Emir of Kano, His Royal Highness, Mai Martaba, Sarkin Kano, Muhammad Sanusi II, Wednesday attributed the current economic hardship in the country to what he called misrule of past administrations.

Sanusi who spoke on the occasion of the Graduation ceremony and Founder’s Day of the University of Benin, where he was installed as the 9th Chancellor of the University, said the Federal Government must make some difficult decisions for the nation to survive.

The Emir said despite the economic hardship being experienced, Nigerians must be thankful to God for a successful election and the prevailing peace in the country.
‎
“In the last one year we had a peaceful election, we have a new government that has the opportunity to give this country a new lease of life. However, the government is taking office at a time of great difficulties. Oil price crashed, we are suffering due to the mismanagement of the past, corruption issues have placed this economy in a precarious state and there will be need for difficult decisions and support for this new administration.

“It is my hope that this university and its students will lead the way in the process, in pursuance of good governance and for Nigerians to imbibe the spirit of sacrifice necessary to put this economy on the move again. I congratulate the President, Muhammadu Buhari for his election. I congratulate the Vice Chancellor of UNIBEN and the senate of the institution for the smooth running of the university.

“I drove round the university, I saw huge construction sites an attestation that the tempo of infrastructural development of the university initiated by the previous administration has continued. I salute your efforts in maintaining peace and tranquillity and ensuring uninterrupted school calendar.

“I commend the exercise that brought in the new Vice Chancellor. I commend the President for his esteem interest in the development of the educational sector. I will add that the commitment of the Federal Government to the provision of quality education for all requires the support of all stakeholders. The days are gone when we look at government alone to do all the work. Place all the interest of the university above your personal interest.

“I must admit my sense of fulfilment. The city of Benin has always been paramount in the history of this nation. I see my appointment as Chancellor of University of Benin as a home coming of sort given the critical role of culture and tradition in my upbringing and the importance I attached to it,” Emir Sanusi said.

The President who was represented by the Minister of Education, Alhaji Adamu Adamu, warned that university administrators found to be corrupt would be prosecuted.

He said the Federal Government was prepared to inject more funding into the educational sector but warned against the mismanagement of the funds by the administrators.

“This administration is committed to providing funding for the university system and indeed for the entire educational sector. But I must warn that the Federal government will not fold its hands and watch unscrupulous people mismanage all the viable resources that have been put into the educational sector. We will no longer tolerate this.

“The Federal Ministry of Education is to ensure that all leakages are blocked and this is a promise that we intend to keep. This administration is determined to fight corruption whether in the university system or elsewhere. Members of staff and students must be seen to do their part in this struggle to change our society for the better. It is not just the duty of government. We hope other brother countries will support what the government is doing. Universities must be seen to be leading by example. Due process must not be compromised in all we do,” Buhari said.