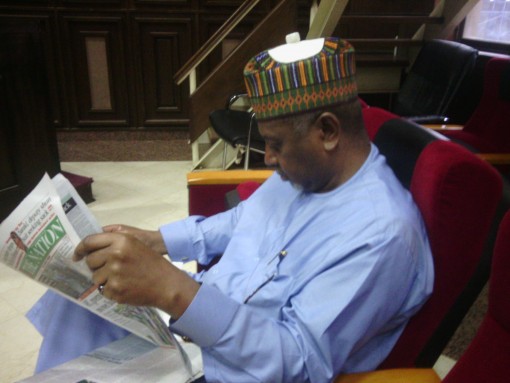 A Federal High Court in Abuja has dismissed the application of the Federal Government seeking to compel the presence of the former National Security Adviser (NSA) Col. Sambo Mohammed Dasuki in court throughout his trial.

In defiance of previous court order, Department of State Security (DSS) has refused to vacate the Abuja residence of Dasuki and preventing him from travelling for medical treatment.

The operatives have placed him on restriction, as they have laid siege to his Abuja home for more than three weeks.

The Federal Government through the Director of Public Prosecution of the Federation (DPPF) Mr Mohammed Diri who filed the application argued that Dasuki was wrong in law by staying away from court for three consecutive times when the case against him came up in court.

He cited section 266 of the Administration of Criminal Justice Act 2015 as a law that makes presence of Dasuki mandatory in court at all times.

But delivering ruling on the application, Justice Adeniyi Ademola dismissed it for being frivolous, unwarranted and lacking in merit.

Justice Ademola agreed with counsel to Dasuki, Mr Joseph Daudu SAN that the law was turned upside down by the Federal Government’s counsel for no just cause.

The judge who read out the section 266 of the Administration of Criminal Justice Act 2015 held that the law was so clear that the presence of an accused person can be dispensed with in court during interlocutory applications.

He agreed that since only interlocutory applications were being argued in court currently, the presence of Dasuki was not mandatory in court for now.

The former NSA had filed an application before the judge to permit his absence in court for now in view` of the alleged threat to his life in the hands of operatives of the Federal Government who have laid siege around his Abuja residence for more than three weeks.

Meanwhile, hearing in another application filed by the Federal Government seeking court order to revoke the bail earlier granted Dasuki has been fixed for 3 December.

The application could not be heard as Justice Ademola said he was being expected at the on-going Judges Conference in Abuja.

The application filed by Mr Diri is asking the court to commit the former NSA to prison pending the completion of investigation into money laundering allegations against him.

He also opposed the permission granted Dasuki by Justice Ademola to travel abroad for three weeks to treat his ailment, adding that the NSA will escape justice if allowed to go abroad.

Dasuki’s lawyers led by Mr Joseph Daudu SAN have however filed objection to the application on the ground that it was baseless and speculative.

They urged Justice Ademola to dismiss the application.