Nigeria has largest number of child brides in Africa 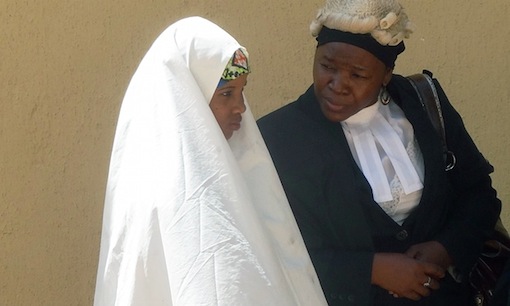 FILE PHOTO: Child bride, Wasila Tasiu, 14, accused of killing her husband and three others in Kano

Nigeria is home to the largest number of child marriages in Africa, a report by United Nations Children’s Fund (UNICEF) has revealed on Thursday.

Mauritania, Niger, Chad and the Central African Republic rank among countries where under-age marriages thrive in Africa but Nigeria, with 23 million, is home to the largest number of child brides.

UNICEF has warned as delegates met in Zambia to discuss how to halt the practice that child marriages in Africa are set to more than double by 2050 unless urgent steps are taken.

The two-day meeting in Lusaka is the African Union’s first conference on “Ending Child Marriage in Africa”, gathering representatives from member states as well as first ladies, UN officials and civil society groups.

“The total number of child brides will rise from 125 million to 310 million by 2050… if we do not do something now,” UNICEF deputy executive director Fatoumata Ndiaye told AFP.

“That means that the face of child marriage will be Africa,” eclipsing South Asia, which currently has the highest number of child brides, Ndiaye said in a phone interview from Lusaka.

The huge jump in the number of children being married off will be triggered partly by the continent’s rapid population growth.

“The child population of Africa is expected to grow rapidly in the coming years putting millions more girls at risk” of early marriage, said UNICEF in a report published as the meeting opened in Zambia.

Africa’s population of girls is expected to balloon from the current 275 million to 465 million within 35 years.

“By 2050 we will have … more teenagers marrying in Africa than anywhere else in the world.

“So it makes it extremely important to do something today and not to wait any more,” said Ndiaye.

UNICEF executive director Anthony Lake said in a statement that the huge numbers of girls affected “underline the urgency of banning the practice of child marriage once and for all.”

The African Union estimates that about 14 million under-age girls are married on the continent each year — almost all of them forced to by their parents, often against laws that are rarely enforced.

“Child marriage is a human rights violation that robs girls of their rights to health, to live in security, and to choose if, when and whom to marry,” the AU said ahead of the meeting.

“It is a harmful practice which severely affects the rights of a child.”

Searing poverty has been one of the driving forces behind early marriages, while traditional customs also play a significant role.

Girls married early face a greater risk of domestic violence, contracting HIV and are likely to die or face complications while giving birth, according to the global coalition Girls Not Brides.