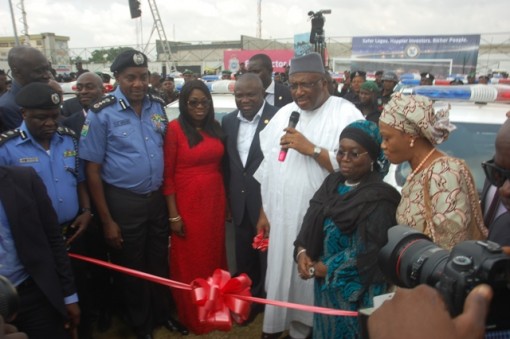 At the event which held at the State House, Ikeja, Lagos, southwest Nigeria on Friday, Buhari said the purchase of the equipment by the Lagos State Government represented a remarkable achievement in the fight against violent crimes in the state.

The president, who was represented by the Minister of Interior, Lieutenant General Abdulrahman Dambazzau (retd), said the nation was currently witnessing several security challenges, such as terrorism, kidnapping, armed robbery, among others, saying that addressing these challenges would require the collaboration of all.

The president said it was also very important to address the issue of socio-cultural aspect of the society in order to arrest youth delinquency, while calling on the youth to shun acts inimical to the progress of the nation.

Noting that Lagos had been facing security challenges, Buhari said the provision of the equipment for the police was a testimony that the state was ready to stamp out criminal activities, while pledging the Federal Government’s support for the state.

He called on other states of the federation to emulate Lagos by supporting the police with security gadgets for it to operate effectively, saying that the vision of his administration was to ensure that the security outfits were given the needed support.

Buhari stated that the police must make concerted efforts to ensure that the equipment were maintained, urging the police to see the donation as a clarion call to deal with armed robbery in Lagos.

Speaking, Governor Ambode said the overall policy thrust of his administration was built on a Tripod-security, job opportunities and improved infrastructure, saying that with a safer Lagos, “we would continue to attract bigger commerce and more local and foreign investment. This would create more job opportunities for our people and generate more taxes for the government to improve on the infrastructure in various sectors.

“With our commitment to light-up Lagos, we are sure we are on our way to creating a 24-7 economy. It is in our best interest. We are all aware of the recent trend in terror attacks all over the world. As one of the emerging global City-States, it has become compelling to re-energize the security infrastructure in meeting with present day realities.”

According to the Governor, “in a bid to reinvigorate the State Police Command, the Rapid Response Squad was established in 1999 under the visionary leadership of Asiwaju Bola Ahmed Tinubu. The Command was further strengthened during the administration of Babatunde Raji Fashola who set up the Security Trust Fund in 2007 to create a Public-Private Partnership to fund the huge investment required to support security operations in the state. The State Police Command has been a major beneficiary of donations of security equipment by the Lagos State Security Trust Fund and government.”

Ambode added that his administration is raising the bar and repositioning the Lagos State Police Command to a standard comparable to similar outfits in other modern City-states as the Lagos Police Command would have its operations significantly driven by the right technology and equipment that would match the emerging sophistication of crime in contemporary time.

He disclosed that the equipment were purchased at a cost of N4.765 billion, saying that it “is significant to state here that over 50% of this amount came from the Lottery Revenues of the State assigned for good causes and public good. These vehicles and equipment will enable the Command to effectively cover every part of the state and respond to distress calls faster.

“Members of the Police Command have been undergoing training to better equip them for the job. We have also rebranded the Rapid Response Squad of the State Police Command to give them a new identity. Given the encouraging partnership and support of well-meaning citizens and corporate organisations, we are on course to making our state a safe haven only for law abiding citizens.”

The governor charged the police to stamp out crime from the state with the equipment given to them, saying that “Lagosians will not accept excuses,” while calling on President Buhari to support the state.

“Lagos State needs your constant attention as the security of Lagos reflects directly on the economic fortunes of Nigeria. We need you to further strengthen the Federal support to Lagos. I make a renewed call to our corporate citizens to donate to the Security Trust Fund generously. A better, secure Lagos means an open market for all goods and services produced in Lagos. This partnership is a Win-Win and I am committed to it.

“Let me use this opportunity to reiterate that security is everybody’s business. Effective security thrives on collaboration between the public and the security agencies. Let us play our part by acting responsibly and giving useful information on suspected criminals and activities that might lead to the breach of security in our communities to the police through the emergency hotline 112,” he said.

The Inspector General of Police, Solomon Arase commended Ambode for the provision of the equipment, charging the police to brace up for the challenges ahead.

He assured the governor that the huge investment in the equipment would not be in vain as the police would not disappoint in the discharge of their duties in combating crime in Lagos.