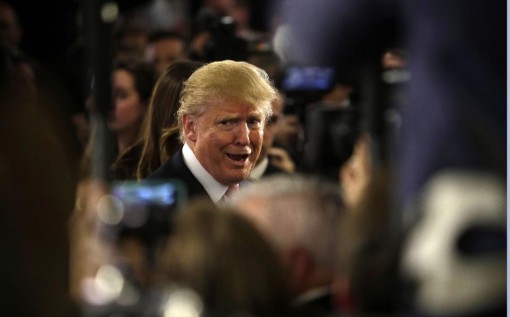 The latest furor surrounding Trump — who often vents about political correctness — raises new questions about what critics say appears to be his inclination to mock people’s physical traits, and make up stories to serve his purposes.

The real-estate tycoon, who earlier this week invited scrutiny after saying that Arab Americans had celebrated the 9/11 terror strikes, courted fresh controversy in a speech in South Carolina in which he defended his claims.

Video shows him appearing to question the credentials of Pulitzer-prize winning reporter Serge Kovaleski, who suffers from congenital arthrogryposis, which interferes with movement of the limbs.

But Trump, 69, who during campaigning for the White House has made no secret of his disdain for the US media, denied poking fun at Kovaleski’s condition and demanded an apology from the “failing” New York Times.

“Serge Kovaleski must think a lot of himself if he thinks I remember him from decades ago — if I ever met him at all, which I doubt I did,” Trump said in a strongly worded statement, while also hitting out at the newspaper in a series of tweets.

“He should stop using his disability to grandstand and get back to reporting for a paper that is rapidly going down the tubes,” he added.

On stage on Tuesday, Trump had lambasted Kovaleski for his recollection of an article he wrote days after the September 11 attacks.

“Now, the poor guy — you’ve got to see this guy, ‘Ah, I don’t know what I said! I don’t remember!'” Trump told the crowd, jerking his arms in front of his body and making a strange face, apparently imitating the reporter.

The Washington Post, where Kovaleski used to work, cited the reporter as saying that he was sure Trump did know him and of his condition.