Siasia cries out: I'm distracted by my mom's abduction 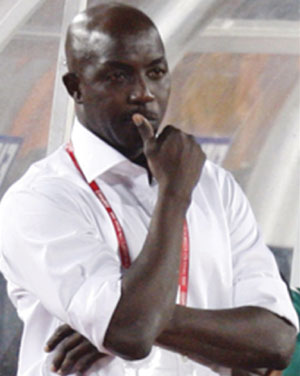 Chief Coach of Nigeria’s U-23 Dream Team, Samson Siasia has cried out to Nigerians that the abduction of his aged mother, Mrs Ogere Siasia, is distracting his attention as the country begins its campaign in the U-23 Africa Cup of Nations, Senegal 2015 which kicks off this weekend.

The 72-year-old woman was abducted recently in the village of Odoni, southern Bayelsa state, by three men on a motorbike.

Since then efforts to rescue the woman by a combined team of security operatives in the state have been futile.

Siasia, whose team arrived Senegal on Thursday ahead of their first match of the tournament on Sunday against Mali, said that it was so sad that this was happening at a time he was saddled with a national responsibility of leading Nigeria to African qualifying championship for Rio 2016 Olympic Games.

He disclosed in an interview on a Lagos-based radio station Friday that the psychological trauma he was passing through was a complete distraction.

The former Nigerian international said that he felt sad that the search for his mother who was abducted two weeks ago was taking too long, adding that the reality was that nobody in his family knows if the woman was still alive.

Speaking on the issue on Friday, Public Relations Officer of the Bayelsa State Police Police Command, Anisim Butswat said investigation is ongoing, but disclosed a not too good news, saying that he could not confirm whether Mrs. Siasia was alive or dead.

“We are hoping that she is alive. We’ll not relent in our efforts to see that we rescue her alive, ” Butswat said.

He added that the family had been negotiating with the kidnappers on the ransom they demanded.

Dennis said the kidnappers had reduced their demand from N150 million to N32m million which the family could still not afford.