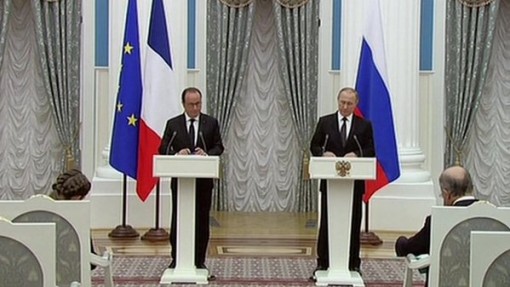 Russian President, Vladimir Putin on Thursday praised efforts by his French counterpart, Francois Hollande to set up a coalition to fight the Islamic State terrorist militia.

“You’re putting a great deal of attention and effort into the creation of a broad anti-terrorist coalition.

“What’s more, we think this coalition is absolutely necessary and that’s where our positions coincide”, Putin said in a meeting with Hollande.

The meeting became imperative owing to Nov. 13 terrorist attacks in Paris, Oct. 31 downing of the Russian A321 passenger jet in Egypt, both attacks claimed by the Islmaic State.

“All of this prompt us to pool efforts in the struggle with this common evil, as we are mourning together with you over the losses France has suffered,” he added.

For his part, Hollande thanked all Russians for their reaction to the Paris terrorist attacks.

“I have come here so that we could find a solution and move together on this path, effectively fighting the common enemy and searching for political solutions to settle the situation in Syria”, Hollande said.

Hollande travelled to Moscow for a meeting and working dinner with Putin as part of a week long campaign by Hollande to push for a more aggressive approach to fighting the Islamic State.

Prior to Hollande’s arrival, Putin made calls on Thursday for a unified, powerful force to combat terrorists in Syria, indicating a willingness to work jointly with France.