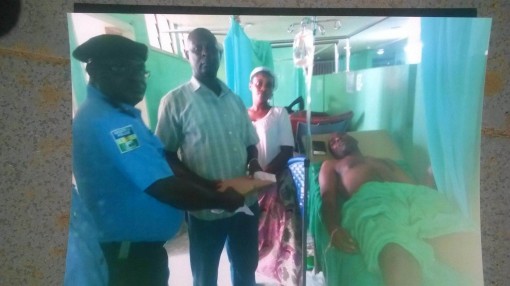 Ogun State Police command has debunked report in a Nigerian newspaper, (not P.M.NEWS) and on social media that police corporal, Godwin Ebhadoghe, who was shot by armed robbers during a robbery attack on a bank in Agbara area of Ogun State last week has been abandoned at the hospital.

The State police Command has described the report as false and unfounded.

In a statement signed by the State Police Public Relations Officer, PPRO, DSP Olumuyiwa Adejobi, the Command stated that the story or rumour was false and baseless, adding that those who fabricated the falsehood were mischievous and did so for reasons best known to them.

The Command therefore appealed to the general public to disregard the news as the police will not in anyway toy with the welfare of any of it’s personnel.

“To put the record straight, the injured policeman, since the day of the incident has been enjoying support in all ramifications including finances from the Police Divisional Headquarters, Agbara, the Ogun State Police Command, Eleweran, Abeokuta, the branch of the bank he was attached to before the incident, the corporate headquarters of the same bank in Lagos and the Government of Ogun State.

“In addition, it’s certain that the Insurance section of the Nigeria Police Force will do the needful to get him his entitlement without delay.

“In fact, the financial support so far received by the cop is enough to take care of his treatment all through, which is why he had been moved to the University College Hospital, Ibadan for proper treatment,” the statement by Adejobi reads in part.