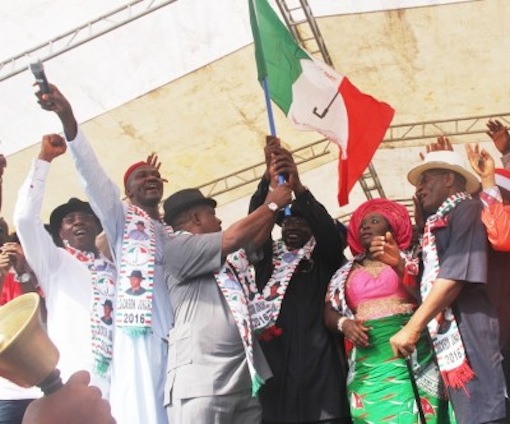 Former President Goodluck Jonathan has cautioned Bayelsans not to throw away their votes to candidates of the other political parties, if they want peace and development in the state.

The security operatives had hectic time controlling the crowd as market men and women and thousands of the PDP supporters from across the creeks of Bayelsa defied the scorching sun to witness what is being described as the mother of all rallies.

Describing Bayelsa state as a PDP stronghold, Jonathan added that Governor Dickson by all conceivable standards has performed creditably and is qualified to do a second term in office.

He called on Bayelsans, particularly the youths, to secure their future by voting for the PDP in next Saturday’s governorship election, adding, “Governor Dickson is the only candidate that can secure your future.”

He stressed the need for Bayelsans to reciprocate his good deeds in terms of provision of infrastructure and laying the foundation for investment and entrepreneurship to thrive in the state. According to him, “for the past 16 years, being a pioneer deputy Governor and a Governor at the State level, a vice-president and President of our country, I am in a position to say that Dickson has tried and is still trying.

Dr. Jonathan, who later commissioned the first ever flyover and the newly dualized Azikoro road in Yenagoa, shortly after the rally added, “we should all be concerned about what Bayelsa will be in the next 25 years and beyond, and not what we want to gain today. You can only see that from the kind of policies, projects and programmes that a Governor brings to bear.

“I have looked at his policies and programmes and I am convinced that he is a visionary leader. He is preparing Bayelsa state for tomorrow. I am telling the young people that this election is not for Jonathan or Dickson. This election is for you. So, vote for your liberation. You vote to live in peace and a developed society,” he said.

Performing the flag handing over ceremony, the acting National Chairman of the party, Prince Uche Secondus, berated the Buhari led Federal Government for running the nation’s economy aground six months into office and urged Bayelsans to totally reject the All Progressives Congress, (APC) in the forthcoming election.

Prince Secondus, who noted that the PDP was aware of clandestine moves being made to rig the election, called on the electorate to come out en masse to vote for the PDP and stand firm to defend their electoral rights.

In the same vein, the Chairman of the PDP Governors’ Forum and Governor of Ondo State, Olusegun Mimiko, described the APC government as clueless and without direction in managing the national economy.

He urged Bayelsans to remain resolute in their support for the PDP candidate, as a vote for Governor Dickson will usher in more development, peace and stability.

In his speech, Governor Dickson reiterated his commitment to a peaceful poll and stressed the need for the Federal government to do everything within its reach to ensure a free and fair election in the state.

Appreciating the National Working Committee of the PDP and his teeming supporters within and outside the state, Governor Dickson disclosed that the turnout has further confirmed that the people of the state have rejected the leading opposition party (APC).