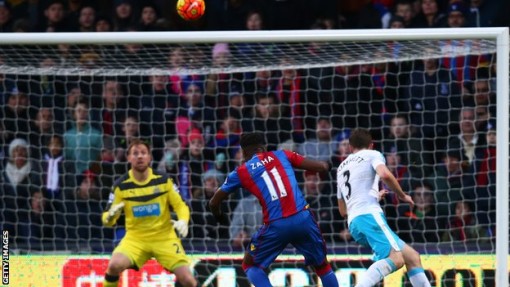 Alan Pardew enjoyed victory against his old club as Crystal Palace came from a goal down to trounce Newcastle.

Striker Papiss Cisse opened the scoring for the visitors with a glancing free header from close range on 10 minutes.

Palace move up to seventh after a devastating display in which they could have won by more.

Jason Puncheon and Joel Ward both had efforts saved by Rob Elliot – the goalkeeper could do nothing about the five he did concede though.

Pardew was manager of Newcastle between December 2010 and January 2015, taking the club back into the top flight from the Championship.

Since he took over at Palace the Londoners have seen an upturn in their fortunes, earning 53 points compared to Newcastle’s measly return of 23 in the same period.

This showing against his old side was full of pace and attacking intent, as the hugely impressive Bolasie and Zaha were allowed to display their quick footwork and trickery to torment the Magpies defence.

Their fifth goal was a stunning effort as winger Bolasie led a speedy counter-attack and McArthur was on hand to finish from close range.

Plaudits should also go to lone frontman Connor Wickham who held the ball up and brought his team-mates into play with his strong, unselfish work. The Palace striker notched up two assists in the match.