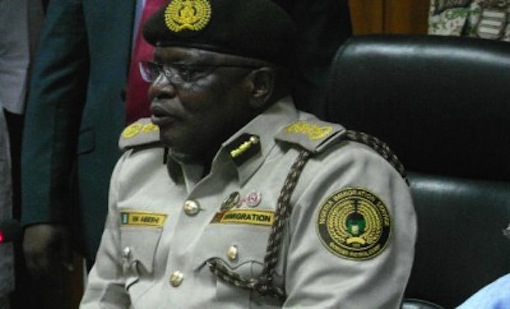 Martin Abeshi, the Comptroller-General of the Nigeria Immigration Service (NIS), on Saturday, called for a shift from manual to digital border control in order to tackle terrorism and other criminal activities.

He made this call in Keffi at a reception organised by Keffi Old Boys Association, Set 21 of Government College, Keffi in his honour.

NAN reports that the occasion was also in honour of the Vice- Chancellor of Plateau State University, Bokkos, Prof. Danjuma Sheni.

Abeshi said that the call had become necessary to tackle the incessant activities of insurgents and other criminal acts and to ensure that the borders were completely secure for the development of the country.

“For the country to secure its borders effectively, to tackle terrorism and to control the movement of people, especially bringing arms into the country, there should be a shift from manual to digital or e-border control.

“We want government to provide facilities such as high tech facilities, cameras and sensors in all its borders that can effectively detect criminal activities such as terrorism and illegal importation of arms into the country.

“We cannot continue with manual way of controlling people because an eye has a limit to go but when we have high tech sensors, it can go far and detect people who carry even a pin, five kilometres afar,’’ he said.

Abeshi called on Nigerians to support President Muhammadu Buhari security efforts, so as to end incessant insurgency and other security vices facing the country.

Mr Bashiru Ojoko, the chairman of the occasion, urged all the members the old students’ association to contribute positively to the development of the school.

NAN reports that Mr Andrew Yakubu, former NNPC Managing Director and Justice Nasir Ajanah, among others, who are members of the association, attended the reception.