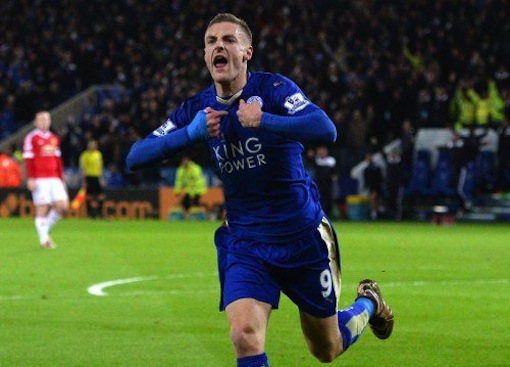 Leicester City striker Jamie Vardy described his achievement as “unbelievable” after he set a new Premier League record by scoring for the 11th game running on Saturday.

Vardy, 28, struck in the 24th minute of a 1-1 draw with Manchester United at the King Power Stadium to break a record he had previously shared with former United striker Ruud van Nistelrooy.

Watching a replay of his ecstatic goal celebration after the game on Sky Sports, he said: “Unbelievable. I think I got a bit carried away with myself.”

Van Nistelrooy was quick to congratulate Vardy, writing on Twitter: “Well done @vardy7! You’re number one now and you deserved it. #11inarow.”

Vardy struck with his first chance of note, haring onto a pass from Christian Fuchs down the inside-right channel and drilling a shot across United goalkeeper David de Gea.

It was his 14th goal of the league campaign, which makes him the division’s top scorer, and comes just three years after he was playing for Fleetwood Town in English football’s semi-professional fifth tier.

Asked by former United goalkeeper Peter Schmeichel what he had been shouting to the crowd as he celebrated, Vardy smiled and said: “I don’t think I can repeat it, to be honest with you!”

Speculation as to whether Vardy would claim the record outright had been rife since he equalled it in last weekend’s 3-0 win over Newcastle United and he said that he done his best to block it out.

“If I let it get to me, then it’s going to affect my performance, so I’ve just been keeping my head down, not let it sink in my head and just concentrate,” said the England international.

“It’s just another game that we wanted to try and get three points in.”

United goal-scorer Bastian Schweinsteiger said: “Vardy is playing really well and is dangerous. He runs in the channels. He did well to break the record.”

Vardy’s scoring sequence began with a late penalty in a 1-1 draw at Bournemouth on August 29 and has also included braces against Arsenal and Southampton.

Van Nistelrooy’s record had stood since 2003, but unlike Vardy, the Dutchman’s run was spread over two seasons.