Economic hardship is over in Osun, says Aregbesola 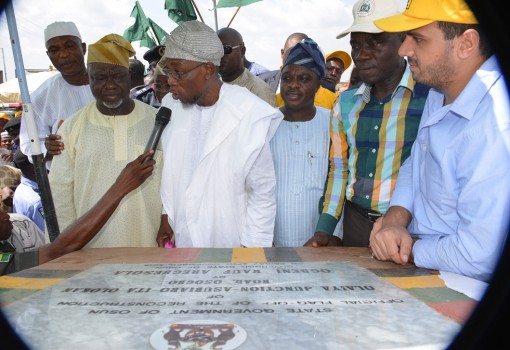 As the present administration in Osun enters its 6th year in office, the Governor of Osun, Ogbeni Rauf Aregbesola has said that the economic hardship in the state has come to an end.

The ‎governor stated this during the official commissioning of the new Ife/Orile-Owu 33KV feeder line at Orile-Owu, Ayedaade Local Government Area.

Aregbesola noted that his administration is committed to making life meaningful and abundant to the people of Osun hence the infrastructural development in the nooks and crannies of the state.

The governor commended the people of Orile-Owu and its environs for their patience over the years before electricity was restored back to the communities at a total cost of N225 million.

He held that his administration decided to assist the service providers by rehabilitating the Gbongan-Ikire 33KV feeder line, making it to end at Araromi-Owu, Odeyinka and three farm settlements of Mokore, Oyere-Aborisade and Ago-Owu.

Aregbesola stressed that it is quite clear that the new 33KV relief feeder line will ensure stable power supply to the farm settlements thus stemming rural/urban drift by encouraging the teeming populace to return to farming in the farm settlement.

“I want to use this opportunity to admonish us to return to the farms, what we used to rely on as a country and state is no longer there. Oil has now dipped seriously, it is now at about 41 dollars per barrel from over 100 dollars and Nigeria still cannot sell her oil in the international market.

“Anyone who doe‎s not want to starve must return to the farms, I want to assure you that more people will be coming from the cities to this place, please try and get enough place for them to stay, everybody must return to agriculture to survive.

“Our administration recently gave hectares of land to IITA for farming and with the electrification of Orile-Owu and other farm settlements, there will be boost in agriculture around these areas, we all need to take this advantage to take to massive farming for the growth of our state.

“There is no town or village in Osun that has not been touched in terms of infrastructural development by our administration. I want to implore us to pay our taxes for us to continue to enjoy government,” the governor stated.

He noted that the isolation of some settlements from the national electricity grid is now addressed with the construction of the new 33KV outdoor bay at 132/33KV transformer stations in Ajebandele in Ile-Ife.

He noted that the project cost the state‎ government N225, 065, 749.92 and was constructed with fibre cross arms and conductor size of 150mm2 on reinforced concrete poles.

“I want to thank Mr. Governor for his strong support to our Ministry which has enabled it to complete a total of 193 electrification projects and CSDP at the cost of N1,487, 015, 127. 18.

“Currently, three other feeder lines namely: Gbogan/Ikire, Osogbo/Ila, Ibokun/Osunjela and Iwo/Ejigbo are being rehabilitated while another new one is being constructed to link the 132/33KV transformer stations at Ilesa to Fadahunsi injection station in Ilesa”.