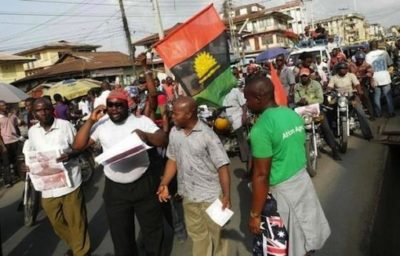 President of the Igbo Youth Congress, IYC, Mr. Bright Ezeocha, on Sunday urged the Nigerian Federal Government to dialogue with the pro-Biafra agitators.

The agitation had increased with protests in major towns in the southern part of Nigeria since one of the heads of the Radio Biafra, Nnamdi Kanu, was arrested and detained by the government weeks ago.

Speaking with journalists in Lagos, Ezeocha also pleaded with acclaimed leaders all over the country to stop making inciting speeches against the Igbo people in order to foster national unity and peace.

According to him, pro-Biafran agitators started due to provocative speeches by some Nigerians as well as the Federal Government’s disposition to the restructuring of the country.

He said there was a need to implement the 2014 National Conference report which endorsed fiscal autonomy and the devolution of powers from the centre to the federating states for the sake of peace and progress on Nigeria.

“As regards the sharp division and ongoing agitations for the Biafra Republic, I feel strongly that we really need to talk.

“In as much as we condemn the agitators, we must also condemn those who instigated the protests through their hate speeches and actions.

“In as much as I am not in support of what is going on in the South-East, I think leaders should be called to order so that the unity of this nation will remain not negotiable.

“There is a need for dialogue. No one will start protesting on the streets without a conviction that what he is doing is right, I think there is need to dialogue.

Ezeocha said that the Federal Government needed to know the grievances of the agitators through this proposed dialogue.

“They are not mad people that would just wake up without a conviction,” he said while asking the government to reverse some of its policies, especially the ones against the Igbo people, as well as balance the number of states in each geo-political zones.

Ezeocha noted that the genesis of the agitation could be traced to when President Muhammadu Buhari told the whole world that he would not treat those who gave him 95 per cent votes equally with those who gave five.

The agitators, he said, expected leaders to condemn such statements and other statements made to the effect that with the 2015 general election, the Igbo people have been conquered and defeated.

“We are not only being treated like a conquered people, leaders are also telling us face to face. This is the genesis,” he said while noting that the President’s body language and his kitchen cabinet appointment made the South-East feel unwanted.

“We are surprise that up till now, the President has not said anything about restructuring Nigeria and this is the only solution to bring peace.

“It is high time, we sat down in any form of conference to chat the way forward for this country because with the way this country is structured currently, it cannot stand the test of time,” he added.