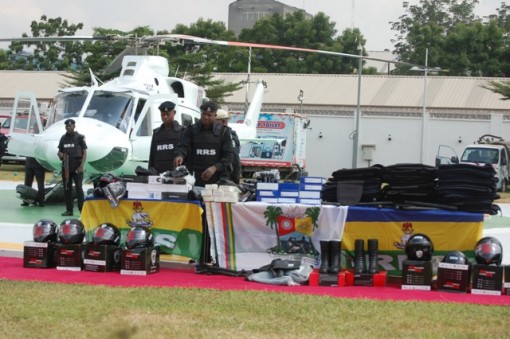 Some of the equipment on display dduring the commissioning

A cross-section of Lagosians on Sunday commended the Lagos State Governor, Mr. Akinwunmi Ambode for equipping the Lagos Command of the Nigeria Police with modern security gadgets and repositioning the Rapid Response Squad (RRS) to effectively combat criminal activities in the state.

In an interview with journalists, a lawmaker representing Agege Federal Constituency in the House of Representatives, Taofeek Adaranijo, described the development as a strong statement by the Governor that the security of life and property is of paramount importance to him.

“It’s one of the things that we are expecting from our Governor and he has shown his commitment to the welfare, security and wellbeing of the people.

“We have seen an upsurge in the wave of crime especially armed robbery in the state in the past few months, but with the procurement of modern security gadgets, the police will have no excuse than to go all out and ensure that Lagosians are safe from attack within the state. It’s no doubt a good development and beginning of good things to happen in Lagos under Governor Ambode,” Adaranijo said.

Another lawmaker representing Ifako Ijaiye Federal Constituency in the House of Representatives, Dr. Elijah Olu-Adewale, commended the Governor, stressing that the equipment would go a long way in boosting the capacity of the police to swiftly respond to security threats in the state.

He urged the people to be vigilant and give necessary information that can assist the police track down criminals.

“This surely is a good development for our state and it shows the commitment of Governor Ambode that security is top priority for him,” Olu-Adewale said.

Lagos lawyer and activist, Ebun Olu-Adegboruwa also lauded Ambode for the initiative to equip the police, but urged the Federal Government to pay adequate attention to provision of job opportunities for the youth so as to keep them gainfully engaged.

He also urged the police to intensify efforts to boost the morale of the rank and file of the police.

Also speaking, Chairman of the Igbo United Political Coalition in Oshodi-Isolo Local Government, Kanayo Osondu, said Governor Ambode’s gesture to the police will go a long way to address the menace of street urchins and hoodlums who take advantage of traffic jams to rob unsuspecting citizens.

“This has raised the bar that the last administration left. It’s a welcome development. Since that day the crime fighting equipment were commissioned for the police in the state, everybody has been very happy.

“We have not known Lagos in recent past to get to the level where we would begin to talk of armed robbers and street urchins harassing motorists in traffic and then when you call the police, they tell you that their vehicles are not functional, to the extent that they start asking the CDAs and CDCs to help to resuscitate their vehicles. So, with this development, we are happy, I am very happy and I want to thank Governor Ambode for taking that initiative. It is something good for Lagos state,” he said.

Osondu urged the Inspector General of Police, Solomon Arase, to ensure that the vehicles and other equipment are maintained so that that the purpose of acquiring them is not defeated.