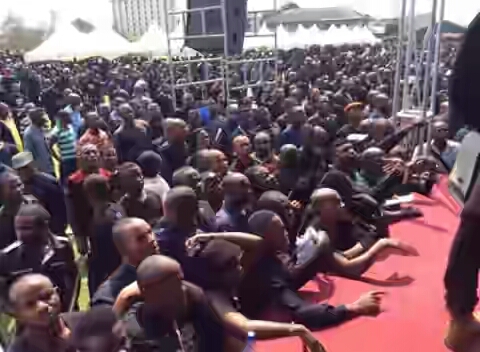 Attacks on supporters of All Progressives Congress, APC, in various parts of the Rivers State Monday, thousands of them converged on the Polo Club to attend a solemn interdenominational service in honour of over 98 of the party members killed in election violence in the state.

Clad in all black attire they were addressed by the state APC Chairman, Dr. Ibiamu Ikanya, who called on President Muhammadu Buhari to as a matter of urgency implement the Prof. Chidi Odinkalu Commission of Inquiry report on election violence in the state.

Ikanya said it is when justice is served that the families of those brutally murdered would feel their loved ones did not die in vain and the souls of the dead will rest in peace.

On his part, Senator Magnus Abe appealed to APC supporters not to despair or be discouraged because justice will be served no matter how long it seems. Let no one have any doubt that those who were killed died in vain.

Godsgift Nwankwo, an APC chieftain from Omuma Local Government Area, lamented that some party members were still being attacked by political thugs allegedly working for the Peoples Democratic Party, PDP.

He said: “As our members were coming to Port Harcourt they were attacked at Igwuruta in Ikwerre Local Government Area and abducted. All in attempt to make sure they don’t honour APC members killed by PDP.”

At the time of the report there were reports that at Isaac Boro Park, Mile One, Diobu in Port Harcourt some youths wearing white T-shirts attacked APC supporters before they were dispersed by the police.

The interdenominational service was ongoing at the time of this report.